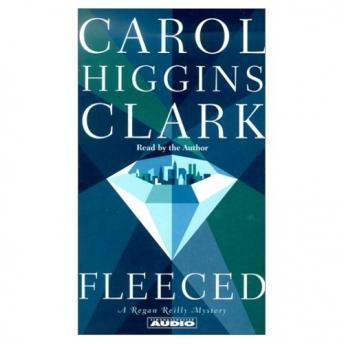 Regan Reilly is back. The smart, saucy sleuth featured in all of Carol Higgins Clark's bestselling novels was last seen in Deck the Halls, the holiday thriller Carol wrote with her mother, Mary Higgins Clark.

Regan Reilly is in New York to attend a crime conference organized by her celebrity-author mother. A friend, Thomas Pilsner—the frenetic president of the Settlers' Club on Gramercy Park—calls Regan, desperately pleading for help. Thomas is distraught over the sudden suspicious deaths of two members of the Settlers' Club. The men had promised to donate a cache of valuable diamonds to save the Club. But now the diamonds are gone, the men are dead, and Thomas is a mess. He fears the police will suspect he is at the heart of both mysteries, and worse yet, he'll lose his job.

Enter Regan. Who better than the star of Decked, Snagged, Iced, and Twanged to solve the mystery of the missing diamonds and suspicious deaths? Who better to contend with the quirky characters around the Club, such as Lydia Sevatura, the self-styled 'Princess of Love,' who operates a dating service, and her butler, Maldwin Feckles, who has just opened the first school of butlering in New York City? And who better than Carol Higgins Clark, with her sparkling, canny prose, to keep the readers guessing to the end 'who done it'?

I wholeheartedly agree with the other 2 reviews that the author should not be the reader. It's not professional enough - she puts emphasis in all the wrong places and doesn't have enough inflection. The book itself was not very good - plot lines thin and didn't hold my interest.

I really enjoy reading Carol Higgins Clark novels, but I have to say listening to this one was just okay. The author should not have done the recording as she does not have the "storyteller" skills to keep a listener's attention. I often lost focus and found the story confusing with character's popping up that I didn't immediately recognize.

Not only is this book not very good, the author's reading of it lacks professionalism. She needs someone else to do the reading.

This title is due for release on October 1, 2001
We'll send you an email as soon as it is available!