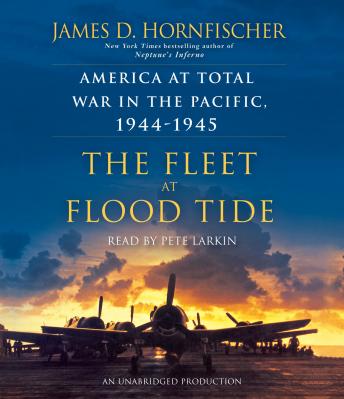 NEW YORK TIMES BESTSELLER • The extraordinary story of the World War II air, land, and sea campaign that brought the U.S. Navy to the apex of its strength and marked the rise of the United States as a global superpower

With its thunderous assault on the Mariana Islands in June 1944, the United States crossed the threshold of total war. In this tour de force of dramatic storytelling, distilled from extensive research in newly discovered primary sources, James D. Hornfischer brings to life the campaign that was the fulcrum of the drive to compel Tokyo to surrender—and that forever changed the art of modern war.

With a close focus on high commanders, front-line combatants, and ordinary people, American and Japanese alike, Hornfischer tells the story of the climactic end of the Pacific War as has never been done before. Here are the epic seaborne invasions of Saipan, Tinian, and Guam, the stunning aerial battles of the Great Marianas Turkey Shoot, the first large-scale use of Navy underwater demolition teams, the largest banzai attack of the war, and the daring combat operations large and small that made possible the strategic bombing offensive culminating in the atomic strikes on Hiroshima and Nagasaki. From the seas of the Central Pacific to the shores of Japan itself, The Fleet at Flood Tide is a stirring, authoritative, and cinematic portrayal of World War II’s world-changing finale.

Illustrated with original maps and more than 120 dramatic photographs

“Quite simply, popular and scholarly military history at its best.”—Victor Davis Hanson, author of Carnage and Culture

“The dean of World War II naval history . . . In his capable hands, the story races along like an intense thriller. . . . Narrative nonfiction at its finest—a book simply not to be missed.”—James M. Scott, Charleston Post and Courier

“An extraordinary memorial to the courageous—and a cautionary note to a world that remains unstable and turbulent today.”—Admiral James Stavridis, former Supreme Allied Commander, NATO, author of Sea Power

“A masterful, fresh account . . . ably expands on the prior offerings of such classic naval historians as Samuel Eliot Morison.”—The Dallas Morning News

One of the best historical books. II read about the war with Japan.