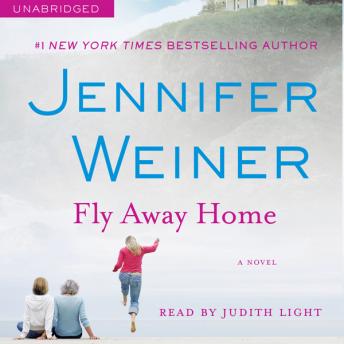 Fly Away Home: A Novel

From one of the nation’s most beloved writers, Fly Away Home is an unforgettable story of a mother and two daughters who seek refuge in an old Connecticut beach house.

When Sylvie Serfer met Richard Woodruff in law school, she had wild curls, wide hips, and lots of opinions. Decades later, Sylvie has remade herself as the ideal politician’s wife—her hair dyed and straightened, her hippie-chick wardrobe replaced by tailored knit suits. At fifty-seven, she ruefully acknowledges that her job is staying twenty pounds thinner than she was in her twenties and tending to her husband, the senator.

Lizzie, the Woodruffs’ younger daughter, is at twenty-four a recovering addict, whose mantra HALT (Hungry? Angry? Lonely? Tired?) helps her keep her life under control. Still, trouble always seems to find her. Her older sister, Diana, an emergency room physician, has everything Lizzie failed to achieve—a husband, a young son, the perfect home—and yet she’s trapped in a loveless marriage. With temptation waiting in one of the ER’s exam rooms, she finds herself craving more.

After Richard’s extramarital affair makes headlines, the three women are drawn into the painful glare of the national spotlight. Once the press conference is over, each is forced to reconsider her life, who she is and who she is meant to be.

Written with an irresistible blend of heartbreak and hilarity, Fly Away Home is an unforgettable story of a mother and two daughters who after a lifetime of distance finally learn to find refuge in one another.

Very light and predictable. Had some good parts but never really had me guessing about 'what next'! Not sure if I'll try another of her books or not. Narration was good.

My first book from this author. It was a light book but rather predictable. I enjoyed Judith Light as the narrator, she made it a much better book.

This book was an ok book but the ending was disappointingly predictable. I could see what was going to happen a mile from the end. no surprises. There is something both humorous and creepy about Judith Light narrating the steamy scenes, though.

Not one of my favorites from her. A decent story of three women touched by one of the political scandals we often see on the news, and of reaching a point where you are forced to reevaluate your life, but it lacked the wit that usually sets Weiner apart. The narration, however, made the most of the funny supporting characters.

This title is due for release on July 13, 2010
We'll send you an email as soon as it is available!