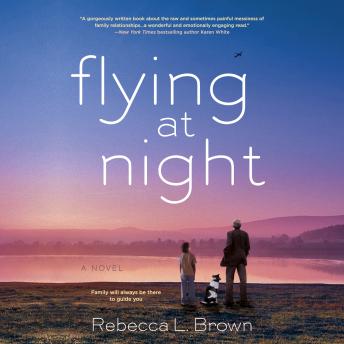 An emotionally charged debut novel of a family on the brink--an autistic child, his determined mother, and her distant father--who learn that when your world changes, you find out who you really are. . . .

While she was growing up, Piper's father, Lance 'the Silver Eagle' Whitman, became a national hero piloting a plane through an emergency landing. But at home, he was a controlling and overbearing presence in her life, raining emotional and verbal abuse upon the entire family.

It's no surprise, then, that as an adult, Piper has poured all of her energy into creating a warm and loving home for her own family, while catering to her son Fred's ever-growing idiosyncrasies.

Then Lance has a heart attack, leaving him with a brain injury--and dependent upon Piper for his care--just before tests confirm Piper's suspicions that Fred is on the autism spectrum.

A powerful and extraordinary novel, Flying at Night gives voice to Fred, trying to find his place in a world that doesn't quite understand him; to Lance, who's lost what made him the man he was, for better and worse; and to Piper, who, while desperately trying to navigate the shifting landscape around her, watches as her son and father start to connect--in the most miraculous ways. . . .

This title is due for release on April 10, 2018
We'll send you an email as soon as it is available!