For Crew and Country: The Inspirational True Story of Bravery and Sacrifice aboard the USS Samuel B. Roberts 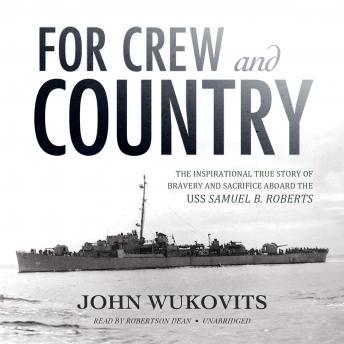 John Wukovits tells of the most dramatic naval battle of the Pacific War and the incredible sacrifice of the USS Samuel B. Roberts.
On October 25, 1944, the Samuel B. Roberts, along with the other twelve vessels comprising its unit, stood between Japan's largest battleship force ever sent to sea and MacArthur's transports inside Leyte Gulf. Faced with the surprise appearance of more than twenty Japanese battleships, cruisers, and destroyers-including the Yamato, at 70,000 tons the most potent battlewagon in the world-the 1,200-ton Samuel B. Roberts turned immediately to action with six other ships. Captain Copeland marked the occasion with one of the most poignant addresses ever given to men on the edge of battle: "Men," he said over the intercom, "we are about to go into a fight against overwhelming odds from which survival cannot be expected."
The ship churned straight at the enemy in a near-suicidal attempt to deflect the more potent foe, allow the small aircraft carriers to escape, and buy time for MacArthur's forces. Of 563 destroyers constructed during WWII, the Samuel B. Roberts was the only one sunk, going down with guns blazing in a duel reminiscent of the Spartans at Thermopylae or Davy Crockett's Alamo defenders. The men who survived faced a horrifying three-day nightmare in the sea, where they battled a lack of food and water, scorching sun and numbing nighttime cold, and nature's most feared adversary-sharks.
The battle would go down as history's greatest sea clash, the Battle of Samar-the dramatic climax of the Battle of Leyte Gulf.

For Crew and Country: The Inspirational True Story of Bravery and Sacrifice aboard the USS Samuel B. Roberts

This title is due for release on January 29, 2013
We'll send you an email as soon as it is available!