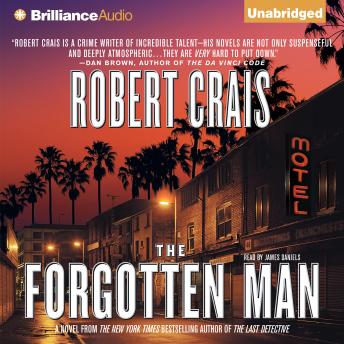 #10 of An Elvis Cole and Joe Pike Novel

“[A] riveting novel with a vivid sense of place . . . Anyone who enjoys a well-written, fast-paced, noirish thriller with a great aha! moment shouldn’t miss The Forgotten Man.”—The Boston Globe

In an alleyway in Los Angeles, an old man, clutching faded newspaper clippings and gasping his last words to a cop, lies dying of a gunshot wound. The victim claims to be P.I. Elvis Cole’s long-lost father—a stranger who has always haunted his son.

As a teenager, Cole searched desperately for his father. As a man, he faces the frightening possibility that this murder victim was himself a killer. Caught in limbo between a broken love affair and way too much publicity over his last case, Cole at first resists getting involved with this new case. Then it consumes him. Now a stranger’s terrifying secrets—and a hunt for his killer—give Cole a frightening glimpse into his own past. And he can’t tell if it’s forgiveness or a bullet that’s coming next. . . .

“Robert Crais is a crime writer of incredible talent—his novels are not only suspenseful and deeply atmospheric but very hard to put down.”—Dan Brown, author of The Da Vinci Code

“A brutal but exhilarating climax.”—USA Today

I liked the book. Some predictability but good. My first time listening to Crais. I will add more to my list

This was my first Elvis Cole book and it was longer than it needed to be. Character development is fine but sometimes there is just too much information. Shorter would have been better. Story was fine. I will try another Elvis Cole book because of all the reviews I have read.

This was the first book I read of the "Elvis Cole" set. I must say if I was not trapped in my car I would had trashed it. It took so l o n g, to get to the meat of the story. But once it got there is was good. It moved, but it left me hanging in a few parts.

I thoroughly enjoyed the first book of the Elvis Cole series and looked forward to this one too. It was certainly NOT a disappointment. In fact, I think I enjoyed this one alot more. It kept me guessing along the way as all the facts slowly fell into place. I can't wait to listen to the next one.

GREAT ENTERTAINMENT! I AM A GRAT FAN OF ELVIS COLE AND JOE PIKE. GIVE ME MORE!!!!!

This title is due for release on February 15, 2005
We'll send you an email as soon as it is available!