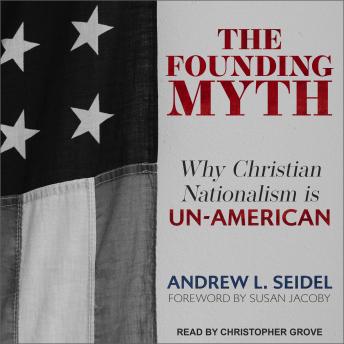 The Founding Myth: Why Christian Nationalism Is Un-American

Do 'In God We Trust,' the Declaration of Independence, and other historical 'evidence' prove that America was founded on Judeo-Christian principles? Are the Ten Commandments the basis for American law? A constitutional attorney dives into the debate about religion's role in America's founding.

In today's contentious political climate, understanding religion's role in American government is more important than ever. Christian nationalists assert that our nation was founded on Judeo-Christian principles, and advocate an agenda based on this popular historical claim. But is this belief true? The Founding Myth answers the question once and for all. Andrew L. Seidel, a constitutional attorney at the Freedom from Religion Foundation, builds his case point by point, comparing the Ten Commandments to the Constitution and contrasting biblical doctrine with America's founding philosophy, showing that the Bible contradicts the Declaration of Independence's central tenets. Thoroughly researched, this persuasively argued and fascinating book proves that America was not built on the Bible and that Christian nationalism is, in fact, un-American.

The author's point is well made and detailed. I found the book as very dry and the narrator did nothing to enhance the material.

Incredibly detailed analysis of historical documents, with a huge list of source references. The narrator did a decent job, but word emphasis was frequently misplaced and the cadence was off, which was distracting.