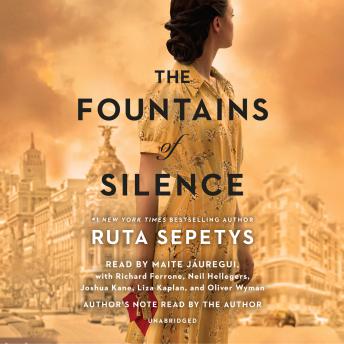 The Fountains of Silence

From the #1 New York Times bestselling author of Salt to the Sea and Between Shades of Gray comes a gripping, extraordinary portrait of love, silence, and secrets under a Spanish dictatorship.

Madrid, 1957. Under the fascist dictatorship of General Francisco Franco, Spain is hiding a dark secret. Meanwhile, tourists and foreign businessmen flood into Spain under the welcoming promise of sunshine and wine. Among them is eighteen-year-old Daniel Matheson, the son of an oil tycoon, who arrives in Madrid with his parents hoping to connect with the country of his mother's birth through the lens of his camera. Photography--and fate--introduce him to Ana, whose family's interweaving obstacles reveal the lingering grasp of the Spanish Civil War--as well as chilling definitions of fortune and fear. Daniel's photographs leave him with uncomfortable questions amidst shadows of danger. He is backed into a corner of difficult decisions to protect those he loves. Lives and hearts collide, revealing an incredibly dark side to the sunny Spanish city.

Master storyteller Ruta Sepetys once again shines light into one of history's darkest corners in this epic, heart-wrenching novel about identity, unforgettable love, repercussions of war, and the hidden violence of silence--inspired by the true postwar struggles of Spain.

Praise for The Fountains of Silence:

* '[Sepetys] tells a moving story made even more powerful by its placement in a lesser-known historical moment. Captivating, deft, and illuminating historical fiction.' --Booklist, *STARRED REVIEW*


Read by Maite Jáuregui, with Richard Ferrone, Neil Hellegers, Joshua Kane, Liza Kaplan, and Oliver Wyman, and with an Author’s Note read by the author

A work of historical fiction, this book takes a compassionate look at the life of many Spaniards under the oppressive rule of Generalissimo Franco and the horrendous stealing and selling of infants during his reign - and beyond. Through the eyes of a young, naive and idealistic American photographer, we are shown the desperate living situation of many Spaniards, particularly those whose families fought against Franco during the Spanish Civil War. We are also shown how arrogantly clueless even the most well-intentioned outsiders can be. Reminiscent of “Before We Were Yours” by Lisa Wingate, we see how evil abuses power and faith to fuel greed by taking advantage of vulnerable people, especially children. But we are left with the feeling that brave, honest and ethical people can make a difference and even find love across cultural chasms. Captivating and both heart wrenching and heartwarming, this book is an excellent listen.

The numerous chapters kept the book for a coherent flow...like the author had ADD?