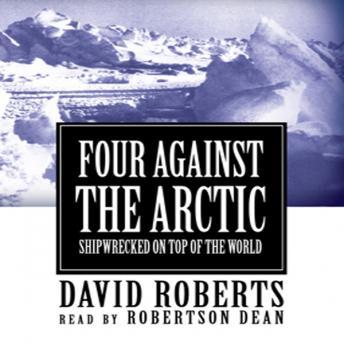 Four Against the Arctic

In 1743, a Russian ship was blown off course and trapped in ice off the coast of Svalbard (Spitzbergen), a barren Arctic island. Four sailors went ashore with only two days' supplies, and only twenty pounds of flour for food. Upon return they found the ship had vanished, apparently crushed and sunk by the ice. Blessed with courage and ingenuity, the men survived more than six years of unimaginable hardship-including polar bear attacks-until another ship blown off course rescued them.
An expert on the literature of adventure, David Roberts was incredulous when he first heard the story. His near-obsessive quest to find the true story culminated with his own journey to the same desolate island. Here, Roberts shares the remarkable story that he discovered, a meditation on the genius of survival against impossible odds.
Riveting and haunting, Four against the Arctic chronicles an incredible true story.

Four Against the Arctic

This title is due for release on June 25, 2005
We'll send you an email as soon as it is available!