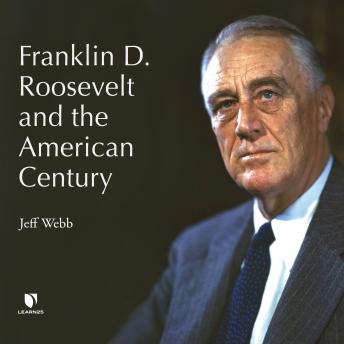 Revered as a consummate statesman who cemented America's place on the global stage, Franklin Delano Roosevelt affected tremendous change in the United States in course of his career. To understand his life is to understand how the nation claimed world leadership in what many call the American Century.

In this fascinating course, award-winning American history professor Jeffrey Webb introduces you to the man behind the legendary life. You'll begin by learning about FDR's privileged upbringing and early career in public service, explore his unconventional marriage to Eleanor Roosevelt, and recount his life-long struggle with paraplegia beginning at age thirty-nine.

You'll also cover FDR's progressive policies as governor of New York during the Great Depression and the historic New Deal, which set the nation on a new path of social and political development.

Prof. Webb provides enlightening context for FDR's confrontation of the Third Reich and Imperial Japan and his celebrated leadership of the Allies. You'll explore his wartime "home front" policies-including the internment of Japanese Americans-that dramatically expanded the power of the federal government.

In this remarkable series, you'll learn how FDR's mind and career were shaped by the titanic events of his era, and how his leadership in this era of bewildering change defined America's, and the world's future.

This title is due for release on November 9, 2020
We'll send you an email as soon as it is available!