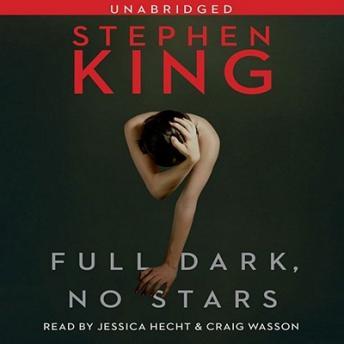 “The pages practically turn themselves” (USA TODAY) in Full Dark, No Stars, an unforgettable collection centered around the theme of retribution.

In “1922,” a violence awakens inside a man when his wife proposes selling off the family homestead, setting in motion a grisly train of murder and madness.

In “Big Driver”, a mystery writer is brutally assaulted by a stranger along a Massachusetts back road and plots a revenge that will bring her face-to-face with another stranger: the one inside herself.

In “Fair Extension,” making a deal with the devil not only saves a man from terminal illness but also provides rich recompense for a lifetime of resentment.

In “A Good Marriage,” the trust forged by more than twenty years of matrimony is irrevocably shattered when a woman makes a chance discovery leading to the horrifying implications of just who her husband really is.

Like Different Seasons and Four Past Midnight, which generated such enduring hit films as The Shawshank Redemption and Stand by Me, King’s Full Dark, No Stars is a “page-turner” (The New York Times) “as gripping as his epic novels” (St. Louis Post-Dispatch), and “an extraordinary collection, thrillingly merciless, and a career high point” (The Telegraph, UK).

The books were very entertaining. Unfortunately, Ms. Hecht has to be the WORST female narrator of all times! If someone can "overact" while reading, she has mastered it. I have had to endure other books where she narrates and it is so distracting from the story that a few I have returned just to end the irritation.

Where to start, where to start. I gave this 3 stars and I hereby bequeath all three of these stars to '1922'. The first story is very good. It deals with the repercussions of decisions we make, good or bad. May I suggest you just go read the hard copy because the other three stories are a horror and a horror not in a good Kingish way. Just simply awful. And two of the stories are a complete insult to women. Read no further if you want to be surprised by the endings though there are no surprises. Women that are victims of rape don't become psychotic murders. They don't start talking to their GPS and kitty. Good lord. Awful. Of course this is tainted by the absolute worst worst worst narration by Hecht. Her interpretation made them into psychotic nursery school teachers. I felt like I should be sitting in a circle listening to Winnie the Pooh. Please do not waste your time on this one like I did. Tun!

1922 and Big Driver are decent stories, but the other two are mediocre. I\'m not a fan of short stories, or novellas so that probably impacts my rating of this book to a degree. Although I don\'t like them, I do listen to them quite often. The problem is that they usually feel shallow, move too fast, lack proper build up and character development and are generally just not fleshed out enough to be very plausible or entertaining. These stories suffer from many of these issues. It\'s worth a quick read if you grab the hardback or paperback, but don\'t bother with the audiobook. The male narrator is the worst. He talks like an automated apple program. Seriously, just listen to the sample chapter of 1922. He talks about his character murdering his wife as if he were picking up some bread and milk at the grocery store. It\'s ridiculous. The female narrator is really no better, as she reads as if she were presenting a pressure cooker on the Home Shopping Network.

I loved all the stories, they were thought provoking and scary..Wasson does a fine job with 1922 and Fair Extension however Hecht is hands down the worst narrator I have ever heard....I would rather swallow glass than listen to her. I will NEVER purchase another book that she reads....

I can't tell you if the book is any good or not because I just can't get past the narrator. I've listened to hundreds of books of cd and while not every reader is a top 'actor' by any means, this guy is like listening to nails on a chalkboard. I've been a respected talent agent in Hollywood for over 20 years and I just can't understand how the producers of this audio book could hire a reader who is so annoyingly 'over the top' and somehow thinks that a 14 year old boy sounds like a bad community theater version of Pinocchio. Very frustrating and a waste of time. If you're interested in the book itself, and I'm a big Stephen King fan so I understand, I would seriously recommend reading the book the old fashioned way.

Holy crap, Big Driver is the WORST King story I've ever read. I agree with the other reviews, especially lorin's, that the narrator of it is absolutely horrid but the story itself also sucks.

Another fantastic King Quartet! I thought the first story, "1922" was really original and absolutely riveting. In "Big Driver", I became frustrated with the main character as she behaves in a way I found to be completely unrealistic, but, what-the-hey, its fiction, right? Overall, it was a really enjoyable book.

This was an excellent book. I liked having different stories. All were good, but the first was excellent. The reader did an amazing job of reading this first story. If you like Steven King, you' ll love this one.