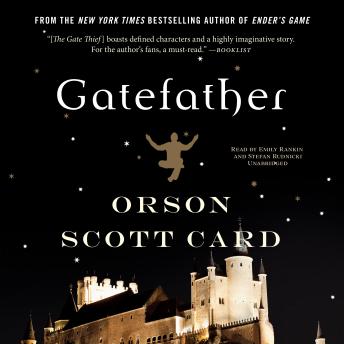 Danny North is the first Gate Mage to be born on Earth in nearly two thousand years, or at least the first to survive and claim his power, for families of Westil in exile on Earth have a treaty that requires the death of any suspected Gate Mage. The wars between the families had been terrible, until at last they realized it was their own survival in question. But a Gate Mage, one who could build a Great Gate back to Westil, would give his own family a terrible advantage over all the others and reignite the wars. So it was decided that they all had to die. And if the families didn’t kill them, the Gate Thief would—that mysterious mage who destroyed every Great Gate, along with the Gate Mage who created it, before it could be opened between Earth and Westil.

But Danny survived. And Danny battled the Gate Thief—and won.

What he didn’t know at the time was that the Gate Thief had a very good reason for closing the Great Gates—and Danny has now fallen into the power of that great enemy of both Earth and Westil.

I have now read all three books and the first one was a five star the second one a four and the third is a three and I was hopeful that the female characters would get better but I was wrong. The female characters are written very badly. The author has no idea. He thinks that all women are either evil, like to seduce men, want to be pregnant, or are just plain catty. There is absolutely no depth in the female characters. This is a shortcoming of the author and I will not read any more books from this author.

This was a boring drab, non thought provoking book where the same statement was discussed over and over.

My only complaint about this book was its price all and all great book!

This title is due for release on October 20, 2015
We'll send you an email as soon as it is available!