The Gates of the Alamo 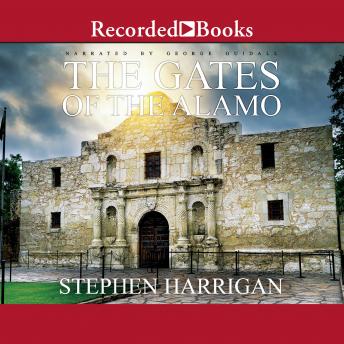 Best-selling author Stephen Harrigan brings one of the pivotal battles in American history to life in this fiery, unforgettable novel. Meticulously researched and overflowing with fascinating characters, The Gates of the Alamo is an experience history buffs and fiction fans will equally enjoy. Edmund McGowan is a gifted naturalist whose life's work is threatened by war. Mary Mott is a widowed innkeeper forced to rely on her own resources for survival. Mary's 16-year-old son, Terrell, is a young man about to experience his first taste of love. Focusing on these three characters-and sprinkling in real-life figures such as James Bowie and Davy Crockett-Harrigan gives a human face to a true American legend. Told from the perspective of the Mexican attackers as well as the American defenders, this New York Times best-seller vividly recreates a time and a place where honor and gallant death shaped generations of people. George Guidall's narration captures all the drama of ordinary people living through extraordinary events.

Gates of the Alamo

This title is due for release on December 27, 2013
We'll send you an email as soon as it is available!