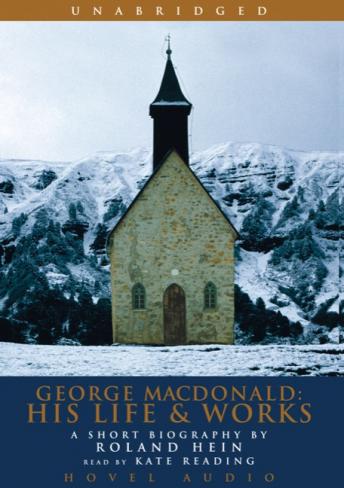 George MacDonald: His Life and Works: A Short Biography by Roland Hein

'George MacDonald's stories and sermons have been like a magic pool of rejuvenating waters. Those who wash themselves in his prose cleanse their imaginations. For many, this begins a process of new faith or deeper appreciation of Christ. That was the path the beloved Christian author C. S. Lewis took when, to use Lewis's own words, MacDonald ''baptized'' his imagination. Lewis went on to say that he never wrote a book that was not influenced by MacDonald. Others too were profoundly moved by MacDonald. The discerning reader will find his mark in the works of G. K. Chesterton and J. R. R. Tolkien, among others. // In this short introduction to the life and works of MacDonald written exclusively for Hovel Audio, renowned scholar Rolland Hein is your guide through MacDonald's Fairyland. You will explore the symbols, motifs, and themes that run through MacDonald's stories, such as The Wise Woman, The Golden Key, and The Princess and the Goblin. Moreover, Hein introduces you to MacDonald's ability to take his imagination into the pulpit, where he preached many powerfully moving sermons. You are sure to experience a renewed sense of respect for one of Christianity's best story tellers.

This title is due for release on July 1, 2005
We'll send you an email as soon as it is available!