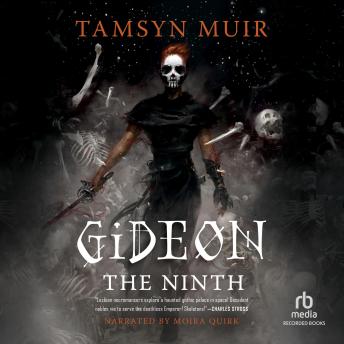 The Emperor needs necromancers. The Ninth Necromancer needs a swordswoman. Gideon has a sword, some dirty magazines, and no more time for undead nonsense. Tamsyn Muir's Gideon the Ninth unveils a solar system of swordplay, cut-throat politics, and lesbian necromancers. Her characters leap off the page, as skillfully animated as arcane revenants. The result is a heart-pounding epic science fantasy. Brought up by unfriendly, ossifying nuns, ancient retainers, and countless skeletons, Gideon is ready to abandon a life of servitude and an afterlife as a reanimated corpse. She packs up her sword, her shoes, and her dirty magazines, and prepares to launch her daring escape. But her childhood nemesis won't set her free without a service. Harrowhark Nonagesimus, Reverend Daughter of the Ninth House and bone witch extraordinaire, has been summoned into action. The Emperor has invited the heirs to each of his loyal Houses to a deadly trial of wits and skill. If Harrowhark succeeds she will be become an immortal, all-powerful servant of the Resurrection, but no necromancer can ascend without their cavalier. Without Gideon's sword, Harrow will fail, and the Ninth House will die. Of course, some things are better left dead.

Book was terrible and boring. Kept waiting for the pay off and it never came. 3/4 through the boom I was wondering why I wasn’t invested in the book yet and I realised that not one character was likeable. They were all annoying and had no redeeming qualities. Couldn’t connect to the story. The narrator was good but the narration hammered home just how annoying the characters were.

I enjoyed the story a lot, and the narration really brought it to life!

This is by far my favorite book ever, and one of the main reasons I'm still here. go loud

wlw necromancers in space. very good, a bit gorey so be aware if that's an issue for you. absolutely fantastic characters, great mysteries in the plot. very excited to read the next one!

Surprisingly engaging and lively for a story about necromancy. Gideon wins you over almost immediately.

Where have pissy butch characters been all my life??

I liked the book. Some parts were a little slow and the main plot was pretty predictable, but still enjoyable.

Well written and a lot of fun. I can't wait to start the second book.

I love Moira Quirk as a narrator, and I generally enjoyed this book. I had some trouble following the plot, but it may make sense after I listen to it again.

this book was excellent. i wasnt sure at first but the naration is perfect and Gideon is now one of my favorite characters ive had the pleasure of knowing through this mystery/dark/descriptive all around good time of a book.

Weird and sad and hilarious.