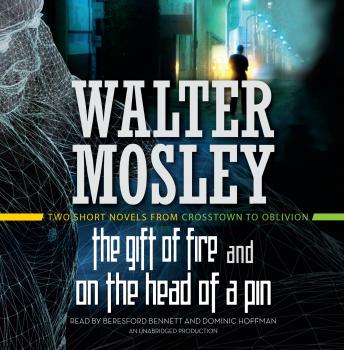 The Gift of Fire / On the Head of a Pin: Two Short Novels from Crosstown to Oblivion

The Gift of Fire
In ancient mythology, the Titan Prometheus was punished by the gods for bringing man the gift of fire—an event that set humankind on its course of knowledge. As punishment, Prometheus was bound to a rock. But in The Gift of Fire, those chains cease to be, and the great champion of man walks from that immortal prison into present-day South Central Los Angeles. Disheveled and lost, he is thrown in jail, where he meets lifelong criminal Nosome Blane. Shocked at what humanity has done with his gift, he looks for another way to empower his cause. His only hope lies with Nosome’s bedridden fourteen-year-old nephew, Chief Reddy, who is anointed with Prometheus’s second gift of fire . . .
On the Head of a Pin
Joshua Winterland and Ana Fried are working at Jennings-Tremont Enterprises. JTE is developing advanced animatronics editing techniques that will create high-end movies indistinguishable from live action. But one night Joshua and Ana discover something lingering in the rendered footage . . . an entity that will eventually reveal itself as “the Sail” and lead Joshua and Ana into a new age . . . beyond the reality they have come to know, and deep into the true nature of good and evil.