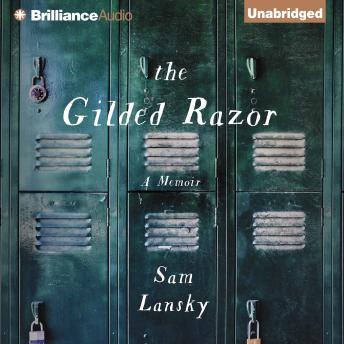 The Gilded Razor is the true story of a double life. By the age of seventeen, Sam Lansky was an all-star student with Ivy League aspirations in his final year at an elite New York City prep school. But a nasty addiction to prescription pills spiraled rapidly out of control, compounded by a string of reckless affairs with older men, leaving his bright future in jeopardy. After a terrifying overdose, he tried to straighten up. Yet as he journeyed from the glittering streets of Manhattan to a wilderness boot camp in Utah to a psych ward in New Orleans, he only found more opportunities to create chaos-until finally, he began to face himself.

In the vein of Elizabeth Wurtzel and Augusten Burroughs, Lansky scrapes away at his own life as a young addict and exposes profoundly universal anxieties. Told with remarkable sensitivity, biting humor, and unrelenting self-awareness, The Gilded Razor is a coming-of-age story of searing honesty and lyricism that introduces a powerful new voice to the confessional genre.

This title is due for release on January 12, 2016
We'll send you an email as soon as it is available!