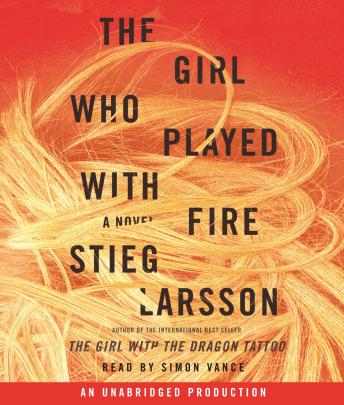 The Girl Who Played with Fire

The next installment of the Millennium series: Mikael Blomkvist, crusading publisher of the magazine Millennium, has decided to run a story that will expose an extensive sex trafficking operation. On the eve of its publication, the two reporters responsible for the article are murdered, and the fingerprints found on the murder weapon belong to his friend, the troubled genius hacker Lisbeth Salander. Blomkvist, convinced of Salander’s innocence, plunges into an investigation. Meanwhile, Salander herself is drawn into a murderous game of cat and mouse, which forces her to face her dark past.

Look for the latest book in the Millennium series, The Girl in the Eagle's Talons, coming soon!

As the 2nd book in the series it did not disappoint. Lisbeth is the best anti hero I've come across in a long time.

Even though this book is part of a trilogy, it can stand alone. There are references to the previous book that allow the reader insight to background information important to the storyline of this book. I was just as captivated by the second book as I was the first.

I found this to be a good story, but the audio itself was very quiet.

Excellent from start to finish.

This book was awesome. I really liked it. Narrator was fantastic.

This book has a good story. I started listening thinking it was 5 stars, but then it just kept going on too long. I was happy to finally get to the end. I don't like abridged books, but in this case it might be better.

Great book. Unpredictable and interesting! Looking forward to the next book of the series!

Great book. Can't wait to read the next one in the series.

Can I give zero stars? It won't be a spoiler for me to reveal that the book starts with a woman being tortured. Well, maybe not tortured but tied down to a bed, which would be torture to a claustrophobe like me. I could only listen for five minutes.

Best book in the Girl Who trilogy. Can be slow at times but it picks right back up. Must read.

I just finished this 2nd in the trilogy and have the 3rd on its way. Well written and well read. I can't wait to see how Larsson wraps up this remarkable journey.

This was a sequel to Golden Tattoo- this was very a good thriller! The author left you standing at the end, so on to the next one I can't wait!

The Girl Who Played with Fire. Excellent Book. Brilliant wriing. Reader is Excellent. Love this series, so interesting. Still want good things to happen to Elisbeth.

This is well worth your time. Great story and reader...by all means put this on your list

Utterly fantastic from start to finish. Especially loved seeing more of Lisbeth's past explained. The ending had me cursing and laughing in equal parts! I listen to these books and the narrartor was spot on! Looking forward to the next experience.

There are some things to get over, such as I am not a fan of the sexual lives of the characters, but by far the story is wonderful. Not a romance, but I can really see how Lisbeth is changing as a person and is starting to see her own value, I loved this book, its great!!!

This series is fantastic! What a joyful ride it has been getting to know the characters. Just added the Hornets Nest and moved it to the top of my rental list. I can't wait until it arrives! Larsson needs to keep this series going.

I LOVED THIS WHOLE SERIES AND WOULD RECOMMEND THESE BOOKS!

This was a wonderful book but DON'T get these out of order! This mistake cost me the first 1/4 of the book to try and figure out the characters...not to mention the names! Hard to keep track of everyone at first. Maybe if listening on a long road trip rather than a commute, it would make more sense but I had to keep going back to reconstruct the links of everyone. But, once I was hooked...I was really hooked. Very engaging characters and great story!

Wow - this is a great series. I can't wait to get the last book. Just great! Truly addictive listen.

Great read & great reader! :) Would highly recommend!! Make sure to read/listen to the series in order.

This is a great read (listen) and worth the effort to listen to. It starts a little slow, but builds slowly toward the climax. It is worth it to listen or read the first in the series, the Girl with the Dragon Tattoo. It helps with the background information. I really like this series.

It took awhile to get into the story, but the reader really created the tones of the story. one of the better epic recordings I have listened too.

This title is due for release on July 28, 2009
We'll send you an email as soon as it is available!