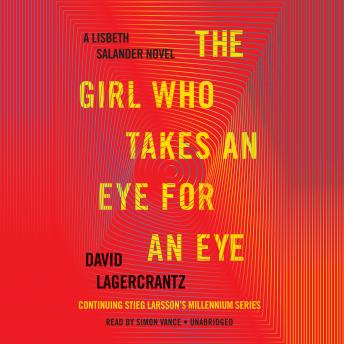 The Girl Who Takes an Eye for an Eye: A Lisbeth Salander novel, continuing Stieg Larsson's Millennium Series

NEW YORK TIMES BESTSELLER • The Millennium series that began with The Girl with the Dragon Tattoo continues in this “engrossing” novel (USA Today) as brilliant hacker Lisbeth Salander teams up with journalist Mikael Blomkvist to uncover the secrets of her childhood and take revenge.

Lisbeth Salander—obstinate outsider, volatile seeker of justice for herself and others—seizes on a chance to unearth her mysterious past once and for all. And she will let nothing stop her—not the Islamists she enrages by rescuing a young woman from their brutality; not the prison gang leader who passes a death sentence on her; not the deadly reach of her long-lost twin sister, Camilla; and not the people who will do anything to keep buried knowledge of a sinister pseudoscientific experiment known only as The Registry. Once again, Lisbeth Salander and Mikael Blomkvist are the fierce heart of a thrilling full-tilt novel that takes on some of the world's most insidious problems.

Look for the latest book in the Millennium series, The Girl in the Eagle's Talons, coming soon!

Salander is the greatest character of all time.

The narrator was terrible! He mispronounced names that by this point in the series, I was so used to hearing them that it took me several mentions before I realized he was, in fact, referring to Berger. He also changed Salandar! It makes it feel like this narrator had never listened to the other books, that he wasn’t invested in the story. As for the story itself, the writing style is similar, though I felt this author went a little too far with the whole suspending disbelief thing. Overall, my least favorite in the series to this point. Good news readers! The next book in the series is back to the original narrator! 3 second in, I breathed a sigh of relief that I hadn’t made a mistake by giving the next book a chance after this disappointing one.

It was not as good as the first four books before I don't think I will be reading the last one .

It’s a good story line being developed, I have enjoyed watching it unfold, the effort to stay close to the original definitely can be noticed, especially the 4th book. But there’s only one Stieg Larsson. The delivery of the 5th book was sub par at best, the attention to details was not even close to the original. Characters seemed flat and not as rich, I find myself not as engaged. That being said, as the story develops, there should be one more book that brings a closure to the relationship between Lisbeth and Camilla, to make the story complete. I hope it’s a great one.

Not as good as the previous books. Story line choppy, just not as good

I am loving all of these books! Such a crazy gripping story! Keeps you interesting and needing to know more!

Not up to the standard of previous books in this series. The characters have suddenly become mundane and lacked any of the uniqueness that made them interesting. That made them worth reading about.

I've been enjoying this series, but this book was a let- down. More accurately, the conclusion was the problem. And by that, I mean that there really wasn't one. All of the books have left threads that were picked up by the next book, but this one leaves things seriously untethered! It also starts abruptly with very little character background/ description. There were also some character deviations. I've noticed that David Lagercrantz clearly isn't as supportive of the open relationship between Blomquist and Berger, but in this one, Berger was jealous and possessive, which isn't her style. Sallander wasn't nearly as clever or sharp as past books. Disappointing. Narrator was good as usual.

I thought this was pretty good and felt it was a continuation of the previous books.

Extremely disappointed in this book I’m very sorry I wasted a credit on this. It’s like the author had another book but he was going to write and he got the opportunity to fold his book into the millennium series.The book Goes on anon with hardly any description of Sallander his descriptions of the scenes are undetailed Do not buy this book.

Very slow moving with some good points but the ending did not ring for me. I felt disappointed and felt like I was watching a serial movie. I will not likely read any more of these.