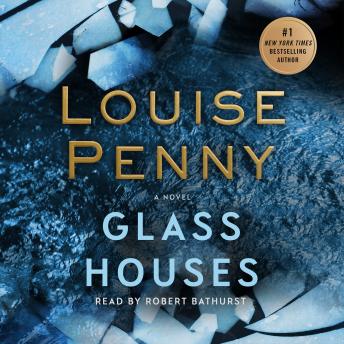 '...the events in GLASS HOUSES challenge Gamache's conscience unlike any of the previous audiobooks, with Bathurst prying open the hero's heart and soul and laying it bare for listeners to experience at a visceral level.' — Audiofile Magazine

When a mysterious figure appears in Three Pines one cold November day, Armand Gamache and the rest of the villagers are at first curious. Then wary. Through rain and sleet, the figure stands unmoving, staring ahead.

From the moment its shadow falls over the village, Gamache, now Chief Superintendent of the Sûreté du Québec, suspects the creature has deep roots and a dark purpose. Yet he does nothing. What can he do? Only watch and wait. And hope his mounting fears are not realized.

But when the figure vanishes overnight and a body is discovered, it falls to Gamache to discover if a debt has been paid or levied.

Months later, on a steamy July day as the trial for the accused begins in Montréal, Chief Superintendent Gamache continues to struggle with actions he set in motion that bitter November, from which there is no going back. More than the accused is on trial. Gamache’s own conscience is standing in judgment.

In Glass Houses, her latest utterly gripping audiobook, number-one New York Times bestselling author Louise Penny shatters the conventions of the crime novel to explore what Gandhi called the court of conscience. A court that supersedes all others.

I thought that this was an excellent mystery novel. Louise Penny always writes intelligent, well thought-through plots. I found some of the circumstances at its resolution a little bit of a stretch, but still a good book, beautifully narrated. The reader does both male and female parts of the story consistently and well.

Love this series. One of the best audio book narrators by a long shot

This is, at best, a collection of notes that could be a novel after many, many edits. Senseless repetition of points, with a smattering of demonstrably false historical "anecdotes" - Coventry bombing slander the least of it. Very disappointing.

Louise Penny certainly made this newcomer to her books feel right at home. Loved her sense of humour, injection of literary references, and micheviois stretching of the cobrador history. Reinforced my love of reading and made me happy I’ve dumped my computer; after all I have 12 more books to read and get to know my new family. See you in 3 Pines.

I wasn't sure if ai would like this app at all, but I dowloaded it on a long drive and am so glad I did (and I'm sure having this book be my first is part of that). Such a good story and a wonderful narrator!

Hurray to Louise Penny for another fabulous read! so lovely to spend some time in the village of Three Pines again and then another rollercoaster ride led by Armand Gamache and his team. The book addresses current issues with drug trafficking within Canada and the US.

Great addition to the series! The only thing I don't like is that it has to end.

Wasn't sure I was going to like listening to a new reader, it only took a couple of minutes to get use to the new reader before becoming engrossed in the story. Good book, good reader.