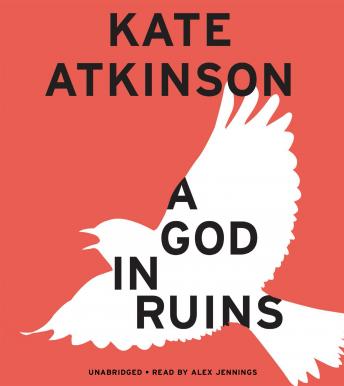 A God in Ruins: A Novel

This stunning companion to Kate Atkinson's #1 bestseller Life After Life, 'one of the best novels I've read this century' (Gillian Flynn), follows Ursula's brother Teddy as he navigates an unknown future after a perilous war.

'He had been reconciled to death during the war and then suddenly the war was over and there was a next day and a next day. Part of him never adjusted to having a future.'

Kate Atkinson's dazzling Life After Life explored the possibility of infinite chances and the power of choices, following Ursula Todd as she lived through the turbulent events of the last century over and over again. A God in Ruins tells the dramatic story of the 20th Century through Ursula's beloved younger brother Teddy -- would-be poet, heroic pilot, husband, father, and grandfather -- as he navigates the perils and progress of a rapidly changing world.

After all that Teddy endures in battle, his greatest challenge is living in a future he never expected to have. An ingenious and moving exploration of one ordinary man's path through extraordinary times, A God in Ruins proves once again that Kate Atkinson is one of the finest novelists of our age.

I read this right after Life after Life and actually liked it even better!. The author is a master at imagery and storyweaving. It is the kind of book you think about for a very long time after finishing it. Narrator did a great job conveying the complexity of the characters.

Couldn't handle this - I had to stop listening. Writing seemed choppy and narrator was just not very engaging in his delivery.

Changing to read this one instead of the audiobook. The narration is so dry that I couldn't pay attention to it for more than a few minutes at a time. I have read Life After Life, so I was actually looking forward to this novel.