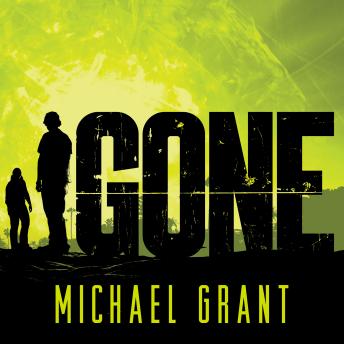 In the blink of an eye, everyone disappears. Gone. Except for the young. There are teens, but not one single adult. Just as suddenly, there are no phones, no internet, no television. No way to get help. And no way to figure out what's happened. Hunger threatens. Bullies rule. A sinister creature lurks. Animals are mutating. And the teens themselves are changing, developing new talents-unimaginable, dangerous, deadly powers-that grow stronger by the day. It's a terrifying new world. Sides are being chosen, a fight is shaping up. Townies against rich kids. Bullies against the weak. Powerful against powerless. And time is running out: on your birthday, you disappear just like everyone else . . .

Michael Grant's Gone has been praised for its compelling storytelling, multidimensional characters, and multiple points of view.

The book is good. The narrator made it awful to listen to. He should not read books aloud. It really affected the story.

I'm giving the narrator 5 stars after getting to book 4. I get why everyone gets irritated by the way they say "SAID", but once you get past that the narration is amazing. I recognize every characters voice and cadence. every single one is unique and consistent.

A strange series, and it gets Dark at times, but it’s a good read.

I love this book but the narrator’s inflection, nasal tone, and long pauses make it harder to listen to, not to mention the racist accent used for Edilio’s dialogue..

This book is amazing, but it takes a bit of time to get used to the narrator. Really recommend giving this book a try.

I've read the book before, and it's really good. But I wanted to over the whole series again with audio books. This guys voice made that decision a hard pass from me. I could not listen to him read an entire book