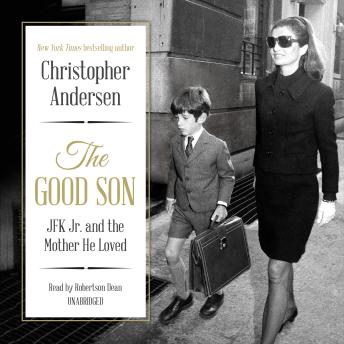 The Good Son: JFK Jr. and the Mother He Loved

The #1 New York Times bestselling author of The Day John Died delivers another dramatic installment in the lives of the Kennedys—including new details about JFK Jr., his relationship with his mother, his many girlfriends, and the night of his tragic death.

Critically acclaimed author Christopher Andersen is a master of celebrity biographies—boasting sixteen bestsellers, among them These Few Precious Days, Mick, and William and Kate. Now in his latest thrilling book, untold details of the life and death of JFK Jr. come to light, released in time for the fifteen-year marker of the tragic plane crash on July 16, 1999.

At the heart of The Good Son is the most important relationship in JFK Jr.’s life: that with his mother, the beautiful and mysterious Jackie Kennedy Onassis. Andersen explores his reactions to his mother’s post-Dallas suicidal depression and growing dependence on prescription drugs (as well as men); how Jackie felt about the women in her son’s life, from Madonna and Sarah Jessica Parker, to Daryl Hannah and Carolyn Bessette, to his turbulent marriage; the senseless plane crash that took his life; the aftermath of shock, loss, grief, and confusion; and much more. Offering new insights into the intense, tender, and often stormy relationship between this iconic mother and son, The Good Son is a riveting, bittersweet biography for lovers of all things Kennedy.

This title is due for release on October 28, 2014
We'll send you an email as soon as it is available!