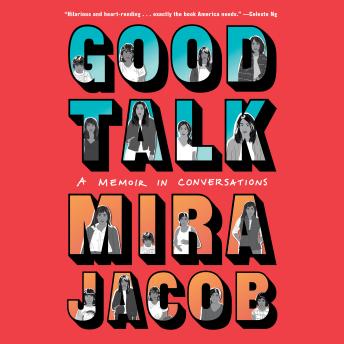 Good Talk: A Memoir in Conversations

A bold, wry, and intimate graphic memoir about American identity, interracial families, and the realities that divide us, from the acclaimed author of The Sleepwalker’s Guide to Dancing.

“By turns hilarious and heart-rending, it’s exactly the book America needs at this moment.”—Celeste Ng

“How brown is too brown?”
“Can Indians be racist?”
“What does real love between really different people look like?”

Like many six-year-olds, Mira Jacob’s half-Jewish, half-Indian son, Z, has questions about everything. At first they are innocuous enough, but as tensions from the 2016 election spread from the media into his own family, they become much, much more complicated. Trying to answer him honestly, Mira has to think back to where she’s gotten her own answers: her most formative conversations about race, color, sexuality, and, of course, love.

Written with humor and vulnerability, this deeply relatable graphic memoir, adapted for audio, is a love letter to the art of conversation—and to the hope that hovers in our most difficult questions.

“[A] breezy but poignant graphic memoir that takes on racism, love, and the election of President Trump. . . . The collage effect creates an odd, immediate intimacy. [Mira Jacob] employs pages of narrative prose sparingly but hauntingly. . . . The ‘talks’ Jacob relates are painful, often hilarious, and sometimes absurd, but her memoir makes a fierce case for continuing to have them.”—Publishers Weekly (starred review)

“A beautiful and eye-opening account of what it means to mother a brown boy and what it means to live in this country post–9/11, as a person of color, as a woman, as an artist . . . In Jacob’s brilliant hands, we are gifted with a narrative that is sometimes hysterically funny, always honest, and ultimately healing.”—Jacqueline Woodson, National Book Award–winning author of Another Brooklyn

“Mira Jacob just made me toss everything I thought was possible in a book-as-art-object into the garbage. Her new book changes everything.”—Kiese Laymon, New York Times bestselling author of Heavy