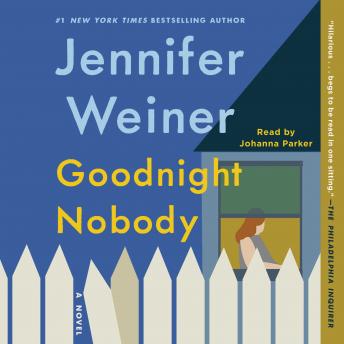 New York Times bestselling author Jennifer Weiner’s unforgettable story of adjusting to suburbia—and all the surprises hidden behind its doors.

For Kate Klein, a semi-accidental mother of three, suburbia has been full of unpleasant surprises. Her once-loving husband is hardly ever home. The supermommies on the playground routinely snub her. Her days are spent carpooling and enduring endless games of Candy Land, and at night, most of her orgasms are of the do-it-yourself variety.

When a fellow mother is murdered, Kate finds that the unsolved mystery is the most exciting thing to happen in Upchurch, Connecticut, since her neighbors broke ground for a guesthouse and cracked their septic tank. Even though the local police chief warns her that crime-fighting's a job best left to the professionals, Kate launches an unofficial investigation -- from 8:45 to 11:30 on Mondays, Wednesdays, and Fridays, when her kids are in nursery school.

As Kate is drawn deeper into the murdered woman's past, she begins to uncover the secrets and lies behind Upchurch's picket-fence facade -- and considers the choices and compromises all modern women make as they navigate between marriage and independence, small towns and big cities, being a mother and having a life of one's own.

After reading other reviews, I felt I had to comment too. I really enjoyed this book. You cannot take fiction to a realistic level. Fiction is just that, this was a good fiction. If I had wanted a serious book, I would have chosen something else. I thoroughly enjoyed this book.

The book was okay, but not memorable. The book did not seem very realistic or exciting to me. However, the ending was interesting and unpredictable (at least to me!).

Okay book. Not great by any means, but a generally intersting read. Got on my nerves at times, but I managed to finish it. Okay book to pass a long commute.

This was a decent read; predictable and slow in places but none the less, enjoyable enough to take my mind off the commute. Narrator did a nice job.

I really liked this book. It's a light read (or listen), and while not Pulitzer material, it was entertaining and fun.

I expected more from this author after reading Little Earthquakes. This book was disappointing but with the twists I forced myself to finish.

I could not get into this book at all. I have read one other book by this author, and it was ok, but this book was very boring to me. It was a complete waste of time.

Good read, interesting and fast paced, kept me interested and wanting more. I will look into other books by this author.

An easy read. Enjoyed the sense of humor for the main character Kate. Kept me guessing for awhile. Would read another.

While I loved Little Earthquakes (also by Jennifer Weiner), this book did not grab me. I could never really relate to the main character and the story line did not grab me.

I loved this story - it was great to get into my car and listen each day. Great story, and great narration.

This book didn't compare to Weiner's other books. I have read and liked all of those, but this was WEAK. Storyline was weak, characters were weak, it was really pitiful. Not a worthwhile way to spend your time.

I was not crazy about this book. I LOVED Good in Bed and In Her Shoes -- and wanted to hear more about the main characters in those two books -- but I could care less about Kate Klein. Part of it was I did not like the voice of the reader -- she had a harsh voice and it sounded too old for the character. But also, Kate Klein was not developed in such a way that you would really care what happens to her or her marriage. She whined and complained – and made stupid choices throughout most of the book – including in her flashbacks. The most sympathetic character was the murdered housewife. Overall, the book was rather depressing and painted an awful picture of giving up work to have children.

This was not as entertaining as her other book. Not bad... just not great.

This title is due for release on March 15, 2011
We'll send you an email as soon as it is available!