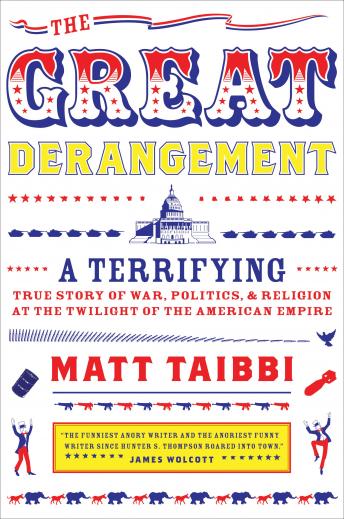 The Great Derangement: A Terrifying True Story of War, Politics, and Religion at the Twilight of the American Empire


Rolling Stone’s Matt Taibbi set out to describe the nature of George Bush’s America in the post-9/11 era and ended up vomiting demons in an evangelical church in Texas, riding the streets of Baghdad in an American convoy to nowhere, searching for phantom fighter jets in Congress, and falling into the rabbit hole of the 9/11 Truth Movement.
Matt discovered in his travels across the country that the resilient blue state/red state narrative of American politics had become irrelevant. A large and growing chunk of the American population was so turned off—or radicalized—by electoral chicanery, a spineless news media, and the increasingly blatant lies from our leaders (“they hate us for our freedom”) that they abandoned the political mainstream altogether. They joined what he calls The Great Derangement.
Taibbi tells the story of this new American madness by inserting himself into four defining American subcultures: The Military, where he finds himself mired in the grotesque black comedy of the American occupation of Iraq; The System, where he follows the money-slicked path of legislation in Congress; The Resistance, where he doubles as chief public antagonist and undercover member of the passionately bonkers 9/11 Truth Movement; and The Church, where he infiltrates a politically influential apocalyptic mega-ministry in Texas and enters the lives of its desperate congregants. Together these four interwoven adventures paint a portrait of a nation dangerously out of touch with reality and desperately searching for answers in all the wrong places.
Funny, smart, and a little bit heartbreaking, The Great Derangement is an audaciously reported, sobering, and illuminating portrait of America at the end of the Bush era.

This title is due for release on May 6, 2008
We'll send you an email as soon as it is available!