The Green New Deal: Why the Fossil Fuel Civilization Will Collapse by 2028, and the Bold Economic Plan to Save Life on Earth 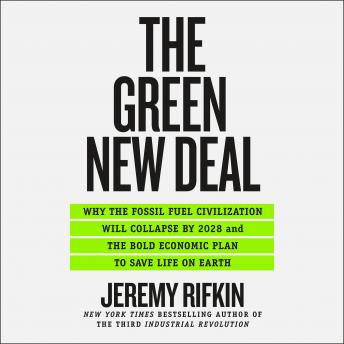 An urgent, workable plan to confront climate change and transform America's economy for a post-fossil fuel world from the New York Times bestselling author of The Third Industrial Revolution.

A new vision for America's future is quickly gaining momentum. The Green New Deal has caught fire in activist circles and become a central focus in the national conversation, setting the agenda for a new political movement that will likely transform the entire US and world economy. Although the details remain to be hashed out, it has inspired the millennial generation, now the largest voting bloc in the country, to lead America on the issue of climate change.

While the Green New Deal has become an overnight sensation, it takes on added weight in lieu of a parallel movement within the global business community that is going to shake the very foundation of society over the next several years. Behind the scenes, the key sectors that make up the infrastructure of the global economy are quickly decoupling from fossil fuels and recoupling with solar and wind energies that are now near parity in cost and soon to be far cheaper. New studies are sounding the alarm about the prospect of 100 trillion dollars in stranded assets as the economy abandons the old energies of the twentieth century for the new cheaper green energies of the twenty-first century, creating a carbon bubble that is likely to burst by 2028-leading to the collapse of the fossil fuel civilization.

This great disruption is occurring because the marketplace is speaking. Every government will have to follow the market or face the consequences. Governments that lead in the scale-up of a new zero carbon green infrastructure and create the new business opportunities and employment that accompany it will stay ahead of the curve. Governments that fail to lead will be doomed.

In The Green New Deal, New York Times bestselling author and renowned economic and social theorist Jeremy Rifkin delivers the political narrative, technical framework, and economic plan for the debate now taking center stage across America. The concurrence of a stranded fossil fuel assets bubble and a green political vision opens up the possibility of a massive global paradigm shift into a post-carbon ecological era, hopefully in time to prevent a temperature rise that will tip us over the edge into runaway climate change. With twenty-five years of experience at the forefront of enacting green transitions for both the European Union and the People's Republic of China, Rifkin offers his indispensable wisdom in a blueprint for how to transform the global economy and save life on Earth.

Green New Deal: Why the Fossil Fuel Civilization Will Collapse by 2028, and the Bold Economic Plan to Save Life on Earth