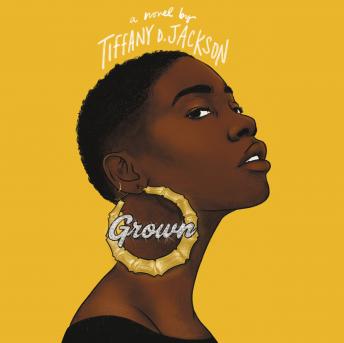 An instant New York Times bestseller! “Grown exposes the underbelly of a tough conversation, providing a searing examination of misogynoir, rape culture, and the vulnerability of young black girls. Groundbreaking, heart-wrenching, and essential reading for all in the #MeToo era.” —Dhonielle Clayton, New York Times bestselling author of The Belles

When legendary R&B artist Korey Fields spots Enchanted Jones at an audition, her dreams of being a famous singer take flight. Until Enchanted wakes up with blood on her hands and zero memory of the previous night. Who killed Korey Fields?

Before there was a dead body, Enchanted’s dreams had turned into a nightmare. Because behind Korey’s charm and star power was a controlling dark side. Now he’s dead, the police are at the door, and all signs point to Enchanted.

“Never have I read a story that so flawlessly hits the highest high and lowest low notes of Black girlhood in pursuit of the American Dream.” —Nic Stone, New York Times bestselling author of Dear Martin and Jackpot

Grown or better yet thinking she was grown. This book made me think of the R. Kelly situation. This Grown ass man, a celebrity Corey Fields(28 year old) started preying in this 17 year old aspiring singer, Enchanted. I mean the welfare checks, heavily videoed, and locked up houses. This pedophile snuck to hang out with her, showed her parents that he was interested in her music career. I mean the whole grooming thang. But he was like jekyll and Hyde. He raped her, made her stay in a heated room, pee in a bucket, took her phone so she couldn't contact her family or friends. Moved her to Atlanta away from Philadelphia where the age of consent was 17, avoiding her parents phone calls. He treated her like a possession and dared her to do anything without his permission, I mean eat, sleep, drink, pee, and talk. These young girls think they're grown or that things are so bad but have no idea what or who's out there. He made her think her parents didn't want her and just wanted his money. He ended up having a house full of girls. Telling them they're a big family, they're sisters. And that God would allow him to have multiple wives. Sick bastard. When caught he releases a gospel album as though it would erase all the bad things. All kinds of girls come out the woods, payoffs, suicide, and much more. This book is crazy. The details made me think it was about R.Kelly especially him not being able to read, and how everyone around him aided in his foolishness, him being married, to the older woman taking his virginity. The media blaming the girls, and his bad childhood, whew. The only thing is that one of the girls didn't kill him, instead he's in jail. #Book38of2020 #bookworm #whatsnext