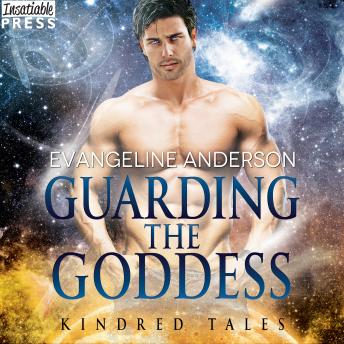 An alien Queen in need of a BodyguardA Warrior who is sworn never to LoveBut what happens when she needs himTo Quell the Heat inside her?Can Ty keep himself from loving Ellina while...Guarding the Goddess?Y’res the Fourth--otherwise known as Ellina--the newly crowned ruler of Helios Beta, has a problem: someone is trying to kill her. There has already been one assassination attempt on her life and she fears that soon there will be another. She needs someone to guard and protect her--someone she can trust. Which is why she calls on the Kindred.Commander Ty'rial is a Kindred warrior in the Elite Espionage Corps. He takes the job of guarding the new ruler of Helios Beta with some reservations. For Ty is a Modified Kindred--his DNA was manipulated before his birth to make him the perfect slave, fit only to serve a spoiled, rich Mistress. Rejecting this fate, Ty has made his own way in life and he has no interest or intention of falling for a female in power--even one who feels frightened and powerless, as Ellina does.Two worlds collide when Ellina admits her fear and Ty begins to see her as a person--not just a Potentate. Feelings between them grow but they can never be together--for Ellina must choose a consort from among her own people--one who can give her an heir with the same Sacred Blue skin tones which she alone possesses. But when another assassination attempt and a villainous plot sets off Ellina's Heat Cycle, can the two of them stay apart?And will either of them ever be the same after Ty is tasked with...Guarding the Goddess?