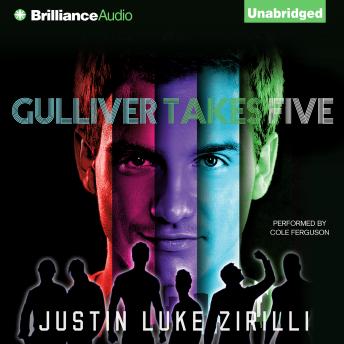 In his wild and addictive follow-up to Gulliver Takes Manhattan, novelist Justin Luke Zirilli revisits a single epic night in the life of Gulliver Leverenz; this time through the eyes of six of Gully’s closest companions. There’s Marty, Gully’s ex-boyfriend, who gets a shot at a breakthrough role that could propel him straight to Broadway; hotheaded Brayden, who copes with a breakup by carving a path of blistering revenge across the city; bickering exes Servando and Rowan, for whom a subway breakdown ignites a powder keg of drama and discovery; Gully’s former best friend Todd, whose job as a gay nightlife promoter is turning out to be anything but glamorous; and go-go boy Chase, finally facing some hard truths about his life—and trying to cope with his harsh reality. Enrapturing, adventurous, and chaotic, Gulliver Takes Five gives readers an exclusive all-access pass to Gay New York for one rough, sexy—and unforgettable—night on the town.

This title is due for release on October 30, 2012
We'll send you an email as soon as it is available!