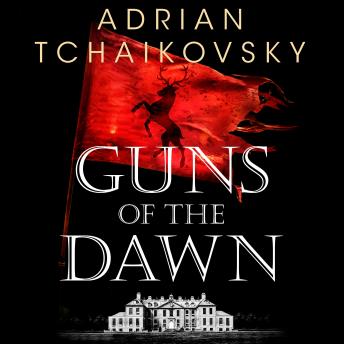 Guns of the Dawn

Shortlisted for the 2016 British Fantasy Society Award for Best Novel.

Guns of the Dawn is a pacey, gripping fantasy of war and magic, from Arthur C. Clarke Award-winning author, Adrian Tchaikovsky.

The first casualty of war is truth . . .

First, Denland's revolutionaries assassinated their king, launching a wave of bloodshed after generations of peace. Next they clashed with Lascanne, their royalist neighbour, pitching war-machines against warlocks in a fiercely fought conflict.

Genteel Emily Marshwic watched as the hostilities stole her family's young men. But then came the call for yet more Lascanne soldiers in a ravaged kingdom with none left to give. Emily must join the ranks of conscripted women and march toward the front lines.

With barely enough training to hold a musket, Emily braves the savage reality of warfare. But she begins to doubt her country's cause, and those doubts become critical. For her choices will determine her own future and that of two nations locked in battle.

I thoroughly enjoyed this novel. Great narrator as well.

This is a fantastic novel! The narration is top notch in all marks. I have the physical copy of all of this authors works I can procure. And with the beautiful cover this one sports , who could blame me.

Truly found this book nor interesting