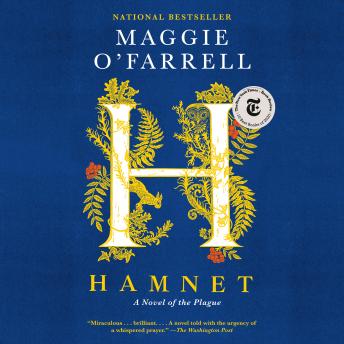 NATIONAL BOOK CRITICS CIRCLE AWARD WINNER • NEW YORK TIMES BESTSELLER • “Of all the stories that argue and speculate about Shakespeare’s life ... here is a novel ... so gorgeously written that it transports you.' —The Boston Globe

In 1580’s England, during the Black Plague a young Latin tutor falls in love with an extraordinary, eccentric young woman in this “exceptional historical novel” (The New Yorker) and best-selling winner of the Women’s Prize for Fiction.

Agnes is a wild creature who walks her family’s land with a falcon on her glove and is known throughout the countryside for her unusual gifts as a healer, understanding plants and potions better than she does people. Once she settles with her husband on Henley Street in Stratford-upon-Avon she becomes a fiercely protective mother and a steadfast, centrifugal force in the life of her young husband, whose career on the London stage is taking off when his beloved young son succumbs to sudden fever.

A luminous portrait of a marriage, a shattering evocation of a family ravaged by grief and loss, and a tender and unforgettable re-imagining of a boy whose life has been all but forgotten, and whose name was given to one of the most celebrated plays of all time, Hamnet is mesmerizing, seductive, impossible to put down—a magnificent leap forward from one of our most gifted novelists.

Exceptional writing. Where or to what it leads is bewildering.

Excellent fictional portrayal of the son of will Shakespeare and his family. The ending could have been more thought out and not end so abruptly.

Wonderfully written. I was entranced and left with a curiosity for all things Shakespeare.

Fascinating fictional account of Shakespeare’s family with well developed characters and depiction of the era. The narration was spot on, and helped breathe life into the emotional lives of the characters. My book group loved the book.

Beautiful book. Really delicious as a literary work. But I agree with Gina M. -- it was too depressing. Too heartbreaking. Too sad. The narrator was excellent.

I thought the writing was fabulous. The author's ability to enable the reader to picture and feel the emotions of the characters was just amazing. I loved it.

Written in such a beautiful way as though it was in the present time. I felt I was living in Elizabethan England.

I selected this book for a book club and absolutely loved the book. The writing is amazing from the beginning. The story is so well told and includes many historical details. There are parts of the story that tear at your heart strings. Maggie O'Farrell draws you into the English countryside of the 1580s, transports you through the twists and turns, and leaves you richer for the experience. Most folks were not thrilled with the selection initially, Everyone loved the book.

Had I been a fan of Shakespeare or were more familiar with Hamlet, I may have found this story more compelling. It was beyond painful to live the experience of a mother losing a child. Narrator did a beautiful job but the story was too heartbreaking for me.

A wonderful listen. Beautifully written, with characters exceptionally well crafted and an unpredictable story-line. I'm sure the book would be terrific to read, but I'm glad I experienced this audio version: the narrator added much to my feeling that I was inhabiting the story.I also enjoyed the previous reviews, and I agree with everything--except that I was touched by the ending.

I liken this book to the finest, most decadent chocolate. It was so rich that I could only nibble on a little at a time. The narrator's accent and tonal quality only made this more apparent for me as she lent an ethereal quality that was hushed, almost hallowed. I could only take so much at a time. The story is lovely, moves quite slowly and dwells on the infinitesimal. If one is expecting high and low drama with wide swings of plot, keep looking. If you're a reader who enjoys the poetry of language, the lyricism of exacting descriptions and the slow, plodding movement of time, then this is a book for you.

I wasn't looking forward to reading this for a book group. Didn't think I knew enough about the play to be able to appreciate the story. Completely unnecessary to know about the play. The story is wonderful. The writing is beautiful. I was drawn in immediately which almost never happens for me. It's interesting cause not a lot is happening, but I felt very drawn into Elizabethan England and the lives of the characters. I missed it when I wasn't reading! The other nice surprise was that, while I don't like listening to books, I loved listening to this. I recently began listening to a few books I had enjoyed reading, so when I couldn't get this in e-book form, I tried the audio version. The narrator was outstanding and actually added to my enjoyment. Just terrific.