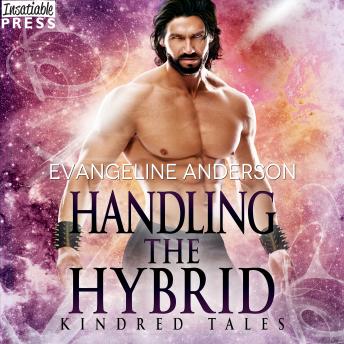 Kindred Tales: Handling the Hybrid Too much to handle... Tandy has a big problem. She stands to inherit a huge estate and the title of her late aunt but in order to prove herself worthy of the exulted position and the money that comes with it, Tandy must train her first slave. And the slave she is given to train is huge—a muscular Hybrid Kindred with rage dancing in his mismatched eyes and fangs long enough to tear her throat out. How can she possibly subdue such a massive male without losing her life? Then Tandy has an idea—in the dead of night she steals down to her new slave’s cell to offer him a deal. Quid-pro-quo... Vrox is enraged to be stuck in this situation. Captured by accident, he is determined to kill whoever tries to enslave him and escape at the first opportunity. But then the curvy little female who bought him offers him a deal—if he will pretend that she has mastered him, she will give him his freedom along with a generous settlement. Vrox is intrigued by the deal but he puts his own spin on the bargain. Whatever Tandy does to him by day to prove that she is a true Mistress, he is allowed to do to her by night, in the privacy of her quarters—including any kind of sexual punishment or mastery. Feeling she has no choice, Tandy agrees to the huge Hybrid’s terms—never expecting to lose her heart. She thinks Vrox cares for her too, but when the huge Kindred escapes and she is left to face the consequences of their deception alone, she fears that her life is over. Will she survive after…Handling the Hybrid?

This title is due for release on April 3, 2020
We'll send you an email as soon as it is available!