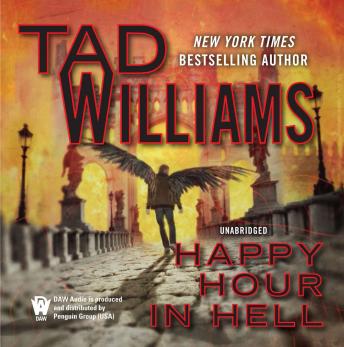 I’ve been told to go to Hell more times than I can count. But this time I’m actually going.

My name’s Bobby Dollar, sometimes known as Doloriel, and of course, Hell isn’t a great place for someone like me—I’m an angel. They don’t like my kind down there, not even the slightly fallen variety. But they have my girlfriend, who happens to be a beautiful demon named Casimira, Countess of Cold Hands. Why does an angel have a demon girlfriend? Well, certainly not because it helps my career.

She’s being held hostage by one of the nastiest, most powerful demons in all of the netherworld—Eligor, Grand Duke of Hell. He already hates me, and he’d like nothing better than to get his hands on me and rip my immortal soul right out of my borrowed but oh-so-mortal body.

But wait, it gets better! Not only do I have to sneak into Hell, make my way across thousands of miles of terror and suffering to reach Pan- demonium, capital of the fiery depths, but then I have to steal Caz right out from under Eligor’s burning eyes and smuggle her out again, past demon soldiers, hellhounds, and all the murderous creatures imprisoned there for eternity. And even if I somehow manage to escape Hell, I’m also being stalked by an undead psychopath named Smyler who’s been following me for weeks. Oh, and did I mention that he can’t be killed?

So if I somehow survive Hell, elude the Grand Duke and all his hideous minions and make it back to the real world, I’ll still be the most hunted soul in Creation. But at least I’ll have Caz. Gotta have something to look forward to, right?

So just pour me that damn drink, will you? I’ve got somewhere to go.

This title is due for release on September 12, 2013
We'll send you an email as soon as it is available!