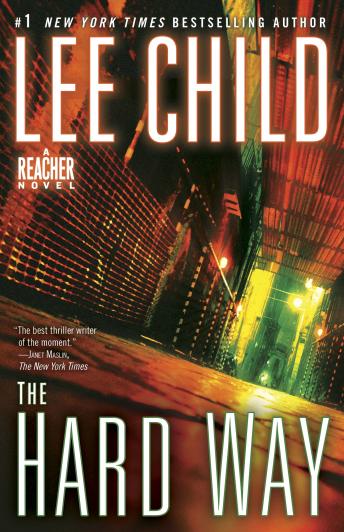 “The truth about Reacher gets better and better. . . . This series [is] utterly addictive.”—Janet Maslin, The New York Times

Jack Reacher was alone, the way he liked it, soaking up the hot, electric New York City night, watching a man cross the street to a parked Mercedes and drive it away. The car contained one million dollars in ransom money because Edward Lane, the man who paid it, would do anything to get his family back.

Lane runs a highly illegal soldiers-for-hire operation. He will use any tool to find his beautiful wife and child. And Jack Reacher is the best manhunter in the world.

On the trail of vicious kidnappers, Reacher learns the chilling secrets of his employer’s past . . . and of a horrific drama in the heart of a nasty little war. He knows that Edward Lane is hiding something. Something dirty. Something big. But Reacher also knows this: He’s already in way too deep to stop now. And if he has to do it the hard way, he will.

Great book....enjoyed while traveling ...excitement in each chapter...

Not the best Reacher book. Too long, boring in parts and I do not like the narrator. Didn't do voices well.

My second Jack Reacher book and it did not disappoint. I believe listening to Jack Reacher is the way Lee Child intended for his books because the narrator is absolutely great......... I can actually hear Jack Reacher speaking. The inflection in his voice confirms exactly as the author intended!

Good read but not as good as Child's other books.

This title is due for release on August 12, 2014
We'll send you an email as soon as it is available!