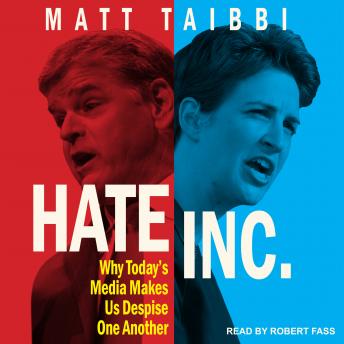 Hate Inc.: Why Today's Media Makes Us Despise One Another

Part tirade, part confessional from the celebrated Rolling Stone journalist, Hate Inc. reveals that what most people think of as 'the news' is, in fact, a twisted wing of the entertainment business.

In this characteristically turbocharged new book, celebrated Rolling Stone journalist Matt Taibbi provides an insider's guide to the variety of ways today's mainstream media tells us lies. Part tirade, part confessional, it reveals that what most people think of as 'the news' is, in fact, a twisted wing of the entertainment business.

In the Internet age, the press have mastered the art of monetizing anger, paranoia, and distrust. Taibbi, who has spent much of his career covering elections in which this kind of manipulative activity is most egregious, provides a rich taxonomic survey of American political journalism's dirty tricks.

Heading into a 2020 election season that promises to be a Great Giza Pyramid Complex of invective and digital ugliness, Hate Inc. will be an invaluable antidote to the hidden poisons dished up by those we rely on to tell us what is happening in the world.

I am a real Matt Taibbi fan for many years and have always thought of him as writing with a liberal slant. This book is anything but that. Exposing how both sides are manipulating us for the almighty dollar, he tears down some of my most respected journalists. He has opened my eyes to their hypocrisy and their succumbing to the demands of the economics of modern journalism, often including his own complicit contributions in the past for which he seems truly repentant. I wish everyone would read this book so we might see how we became so politically intolerant and perhaps be more inclined to see a path to compromise rather than hatred. My only complaint is that Appendix 2, his interview with Noam Chomsky. This discussion between the two intellectuals seems a bit obtuse, difficult to follow and understand. Perhaps if the author broke up the banter and explained this on a more fundamental level, people like me would get more out of it.