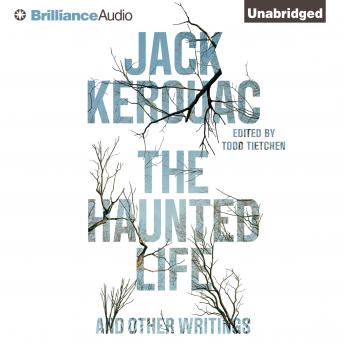 The Haunted Life: And Other Writings

Jack Kerouac wrote The Haunted Life in 1944 when he was 22 years old and attending Columbia University. Originally intended as a three-part novel, only this first 20,000-word section was ever finished. Upon its completion, Kerouac promptly lost his only hand-written final draft in a New York taxi cab, remaining unknown to the public until its appearance at Christies about ten years ago.Kerouac’s family has now decided to share this manuscript with the world.While the entirety of the novel remained unfinished, the surviving manuscript successfully works alone as a novella with a satisfying, if open-ended, conclusion. It features a scaled-down version of the Martin family and is set in Lowell, Massachusetts, as was Kerouac’s first novel The Town and The City. Kerouac had planned on writing a cycle of novels tentatively titled An American Passed Here, which was to be set primarily in the fictional town of Galloway (based on Lowell). That cycle was to contain The Haunted Life and The Sea is My Brother, tracing the story of the Martin family throughout the 1930s and 1940s. Eventually Kerouac’s plans for his Martin cycle materialized into his first novel, The Town and the City, shortly before he moved on to compose his iconic On the Road.Todd Tietchen, the editor of the project and the Jack Kerouac/Beat Scholar in residence at the University of Massachusetts at Lowell, has assembled a number of archival documents to thicken out the context of this lost novella, documents that attest to the level of intention and care that went into Kerouac’s writing projects.

This title is due for release on March 11, 2014
We'll send you an email as soon as it is available!