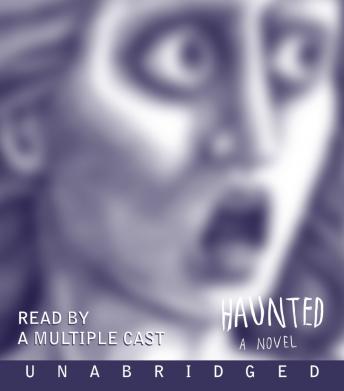 Haunted by Chuck Palahniuk is a novel made up of stories: Twenty-three of them, to be precise. Twenty-three of the most horrifying, hilarious, mind-blowing, stomach-churning tales you’ll ever encounter—sometimes all at once. They are told by people who have answered an ad headlined “Writers’ Retreat: Abandon Your Life for Three Months,” and who are led to believe that here they will leave behind all the distractions of “real life” that are keeping them from creating the masterpiece that is in them. But “here” turns out to be a cavernous and ornate old theater where they are utterly isolated from the outside world—and where heat and power and, most important, food are in increasingly short supply. And the more desperate the circumstances become, the more extreme the stories they tell—and the more devious their machinations become to make themselves the hero of the inevitable play/movie/nonfiction blockbuster that will surely be made from their plight.

Haunted is on one level a satire of reality television—The Real World meets Alive. It draws from a great literary tradition—The Canterbury Tales, The Decameron, the English storytellers in the Villa Diodati who produced, among other works, Frankenstein—to tell an utterly contemporary tale of people desperate that their story be told at any cost. Appallingly entertaining, Haunted is Chuck Palahniuk at his finest—which means his most extreme and his most provocative.

I loved this book..

I'm a fan of this author but this book is a wildly graphic ride that leads to nowhere. Hard to follow as it alternates between character back story and their connected story. The narrators are hit and miss but it could have been the stories they were reading as well. I feel like I read the script for a snuff film that you find on the dark web....and maybe that was the point. In the end, I was happy when it was over.

An extreme book and quite the plethora of male and demale narrators to keep your ears perked as character stories change. A must for gore fans and not for the faint if heart.

Don't waste your time. Kept listening hoping it would get better, but finally gave up after disc 4. How does this guy sell his trash?

A flawed but very good group of stories. As others had noted, not for the weak of stomach. Overall, some very innovative and frightening stories. But, lots of problems and laziness on the part of the author. The stories are independent, with a central story holding them together. But the central story falls apart at the end. Characters that are dead are suddenly standing there with the others. And statements like, "now we could split the royalties 11 ways," were wrong because there were only 8. Sloppy and lazy. This is my 3rd book by Palahniuk, and they all seem to have problems wrapping up at the end. But lots of good ideas, and the oppressive darkness only Palahniuk can evoke.

You really have to be a fan of Chuck to get through parts of this book. So this is not for the weak stomach or those that haven't read Choke. I loved it. One of my favorite of his works. Well read and a must for the demented anarchist that are members of his growing cult.

It was terribly boring. I didn't even finished it. I sent it back. I don't recommend it.

Well, this novel is not for the faint hearted. I had some difficulty rating it as I don't think that it is any great literary work, but I have to give credit where it is due. Some of the scenes are so horrific that I can't get the images out of my head. So, I have to admit that Chuck has a way with gruesome, revolting, details. Read it if you enjoy being shocked--As always, I walk away from his novels with such a sad feeling about the human race--he has such a dark view of human nature.

As other reviewers noted, quite gory and bizarre. Nothing wrong with that per se, but also bored me to tears! A real yawner after you get past the initial shock. Couldn't finish it, on to something better.

Reading the blurb describing this book, I don't get it at all... I must have missed that day in English class... I did not like the book at all, and sent it back unfinished.

The story dragged on and on. The jumping from poems and stories back to the main tail was hard to follow. On the upside I enjoyed the readers that helped keep my interest.

The was such a bad book. I did not like it at all. It was very boring and dumb. Oh yeah it was really nasty (not like gore nasty but like sexual nasty).

There were interesting and entertaining parts, but mostly it was just gross. There was one story in particular that literally made me nauseated which isn't extremely pleasant when one is driving. The disgusting parts didn't even seem to have much literary value; it felt like the vividness of the gross subject matters were purely for shock value or for the sake of grossness. All in all, I can't recommend the book -- the interesting parts are far outweighed by the disgusting parts. There were several times that I wished I had just sent it all back the first time I got grossed out, but I kept figuring that it couldn't get any worse than that -- and then it did.

I expected some ghost story thriller and instead got an audio that was partially making me sick to my stomach. Some of the short stories were really, really good and some of them were just gross and evil. I failed to see the 'satire on realty shows' as promised in the review. The bizarre events of the writers retreat framing the stories were a total turn-off and something I could have gone without. I think the book would have been better as a collection of short stories without the 'novel' writer event around it. I am used to graphic descriptions being an avid Stephen King fan, but the violence depicted in that audio pushed even my limits. I gave three stars because some of the short stories are worth five stars, but the framing writer retreat story was so bad I could not even give it one star. Don't bother renting it if you expect a good paranormal thriller, it will disappoint you.

This book is disturbing, yet difficult to put down. If you have a weak stomach or are easily offended this book is not for you!

This book from beginning to end was vulgar, confusing, and totally unorganized. I took this book thinking it would something related to its title name of a spooky thriller but it was totally not the case. It was a bunch of short vulgar stories which had no meaning. Uptil the end, I still dont know exactly what was going on in the book. Dont waste your time with this book!

This book is not so much haunted as gross. Some of the stories made me very uncomfortable, I didn't think that was possible. Other stories were very interesting and kept me listening and wanting more. The background story is too unbelieveable to take seriously, this could have been a better read if it was left to just the short stories without the background explanation.

This is a great read for people who want something different, that at times doesn't make much sense but grosses you out in an intellectual way. I am a Stephen King fan, and I loved this audio book. Great story, very different, if you don't have a weak constitution! Bravo!

I really liked Flight Club, Choke, and Survivor, but I just couldn't follow this one. Chuck can be really "out there" sometimes and this book was too bizarre for me.

I read the book first and found it fascinating. Mr. Palahniuk is really a very detailed and marvelous writer. The audio book may be confusing at first to those that did not read the book, but come on, guys! I can't believe some of you didn't go past the first 4 discs (there's 11 of them, each more compelling than the first). This is a first-rate fictional study of human behavior, especially when 19 bizarre personalities are forced to cohabitate in an isolated theater. Bear in mind, most of their stories are graphic and nauseating, and sometimes unbelievable, but still compelling. I loved it so much (and I have the book) that I am going to purchase the 11 set DVD.

Couldn't even make it past disc 3 - soooo boring, too much babble in between the stories. The actual stories were somewhat interesting, the premise is promising, however the dialogue just drones on and on. Not a creepy or scary book, just depressing characters without any redeeming values. Kept waiting for it to get better, but it never did.

The beinning was confusing, but as the book has moved along, become more interesting-waiting for the last 3 discs to decide whether I would recommend.

I'm not a particularly sensitive person, but this book made me want to throw up. Really. I read the other reviews saying it was gross, and I didn't think it could be that bad. It IS that bad.

This is a very disturbing story about human nature at it's worst. If you can get through the first set - you might find it appealing in a rubber necking sort of way. There is a lot of strong language and very graphic detail of subjects that make most of us squirm. The characters stories are played out through a series of short stories told throughout the book and they are far from endearing, yet each is compelling if you are a curious type. I liked the narration and though the author tended to get a little overboard on adjectives I thought it was well written. I would only recommend this to a handful of people who have the stomach for the subject matter as it can get very revolting at times. In my opinion, the book served it's purpose. I was totally grossed out yet totally engrossed. I had to know how the author would end this and I have to say I was continually suprised as each character unfolded to reveal how they came to be a part of this group.

This book started with a good premise-a group of people trapped together to write stories. But I could not get into the story. I did not care about the characters and the amount of crude language was hard to ignore. I only listened to the first 4 discs and, therefore, cannot comment on the others. Some of the stories were interesting, but not worth the time it took to get to them. I do enjoy a good scary story, but these stories weren't that scary.

This title is due for release on May 10, 2005
We'll send you an email as soon as it is available!