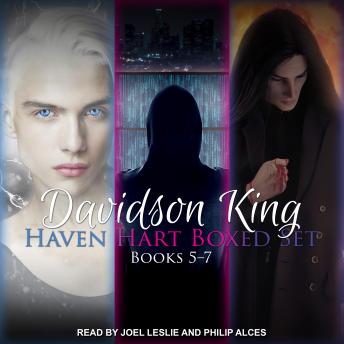 Snow Storm: The city of Haven Hart rests under the heel of Christopher Manos. Snow has found a home, a family, and the love of one of Haven Hart's most powerful men. When Christopher and Simon are kidnapped, Snow risks everything to find his family. Snow calls in every favor he is owed, risking his life promising favors in return, all to save his family and the man he loves.

Triple Threat: Lee, Jones, and Ginger deal with dangerous situations and mounting stress daily working for the most powerful assassin organization in the world. All of those things seem like a walk in the park compared to the friction that sparks between them. When all three are assigned to the same job, ignoring the heat from the inferno of desire becomes impossible.

Raven's Hart: Haven Hart stands on the edge of good and evil. Having balance between the two is the only thing keeping the town from crumbling to the ground. For years, one man has been charged with maintaining that balance. Poe. The air of mystery surrounding Poe is one of necessity. Poe will need the help of his friends to fight the ultimate battle; not just save Haven Hart but everything and everyone he holds dear to him.