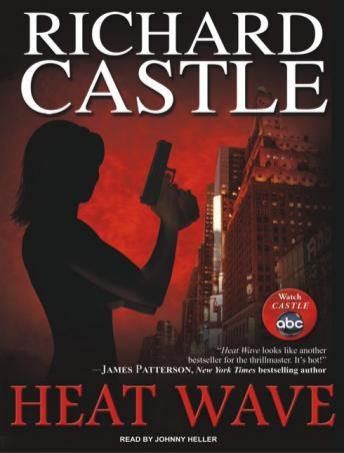 A New York real estate tycoon plunges to his death on a Manhattan sidewalk. A trophy wife with a past survives a narrow escape from a brazen attack. Mobsters and moguls with no shortage of reasons to kill trot out their alibis. And then, in the suffocating grip of a record heat wave, comes another shocking murder and a sharp turn in a tense journey into the dirty little secrets of the wealthy. Secrets that prove to be fatal. Secrets that lay hidden in the dark until one NYPD detective shines a light.

Mystery sensation Richard Castle introduces his newest character, NYPD homicide detective Nikki Heat. Tough, sexy, and professional, Nikki carries a passion for justice as she leads one of New York City's top homicide squads. She's hit with an unexpected challenge when the commissioner assigns superstar magazine journalist Jameson Rook to ride along with her to research an article on New York's Finest. Pulitzer Prize winner Rook is as much a handful as he is handsome. But his wisecracking and meddling aren't Nikki's only problems. As she works to unravel the secrets of the murdered real estate tycoon, she must also confront the spark between them. The one called heat.

Castle, the hit ABC television series, premiered in March 2009. The main character, Richard Castle, is the bestselling mystery author of the critically acclaimed Derrick Storm novels. The hard-nosed but sexy Detective Kate Beckett, with whom Castle is paired up, provided the inspiration for Nikki Heat.

I enjoyed it. It was my first book by this author, but I do love the TV series that it inspired. Narration was good also.

I really loved reading this!! The characters match so well to their Castle counterparts.

This is fan fiction of a sort for the TV show Castle. I have only seen 1 episode of the show so I wasn’t sure what to expect when I got into this book. Heat Wave is a fun, fast-paced murder mystery. Detective Nikki Heat is brought onto a case that involves the murder of Matthew Starr, a real estate baron of New York. Jameson Rook, a reporter, manages to get himself attached to the investigation. The action keeps the story moving along at a fast clip. There’s a little romance between Heat and Rook but it didn’t distract from the murder mystery. The plot itself was pretty straight forward, the mystery being fairly easy to unravel by the reader if not the main characters. There are several sidekicks in the story, like detectives Ochoa and Raley and the medical examiner Lauren Parry. Mostly, they fade into the background and go unnoticed. Lauren has a few moments where her personality shows through. The cast of characters attempts various quips and jokes but much of it comes off flat. I was much more into the serious scenes. The action scenes were usually well done. Over all, I liked Nikki Heat as a character. I will enjoy getting to know more about her in future books. While it was a quick, easy read, it had it’s charms. 3.5/5 stars The Narration: Johnny Heller took some getting used to. His style is nearly monotone but he also tries to go for that hard-boiled detective story feel. Once I settled into his voice, I liked it well enough though I had to pay attention to which character was talking as Heller didn’t always make distinct voices. There were no recording issues. 3.5/5 stars

This title is due for release on October 29, 2009
We'll send you an email as soon as it is available!