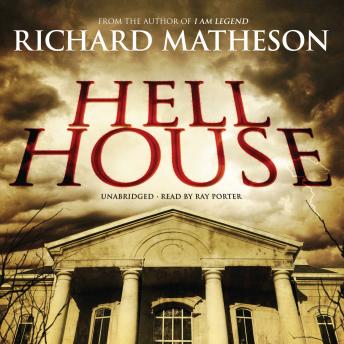 “Hell House is the scariest haunted house novel ever written. It looms over the rest the way the mountains loom over the foothills.” — Stephen KingFrom the author of I Am Legend comes Hell House, the basis for the supernatural horror film starring Pamela Franklin, Roddy McDowall, Clive Revill.

For over twenty years, Belasco House has stood empty. Regarded as the Mount Everest of haunted houses, its shadowed walls have witnessed scenes of unimaginable horror and depravity. All previous attempts to probe its mysteries have ended in murder, suicide, or insanity. But now, a new investigation has been launched, bringing four strangers to Belasco House in search of the ultimate secrets of life and death. A wealthy publisher, brooding over his impending death, has paid a physicist and two mediums to establish the facts of life after death once and for all. For one night, they will investigate the Belasco House and learn exactly why the townsfolk refer to it as the Hell House.

Hell House, which inspired the 1973 film The Legend of Hell House, is Matheson’s most frightening and shocking book and an acknowledged classic of the genre.

I enjoyed the variety of characters and learning about their own specialty. Each one brought their own perspective; a mental medium, a physical medium, a scientist, and his wife. The haunting was throughout the novel, not just a huge amount at the end. It's a very disturbing and creepy haunted house story.

Creepy, creepy, creepy. This was a very unsettling book and I loved it! The first 3/4s of the book focus on the individual characters and the demons that they are dealing with. This is all presented along with very detailed descriptions of the house and the general feeling of horror the plagues the characters that are investigating its haunting. The narrator is also really good and the way he voices Belasco is amazing. I recommend you listen to it.

very well narrated but I felt the story was a let down. I'm a sucker for a good ghost story but in this case the author completely failed to paint a chilling picture and it all ended up rather flat. Also the hauntings seemed to manifest themselves more like an old man's pent up sexual desires rather than something malicious that makes you think twice about things that go bump in the night.

If you love a good horror story then this classic should be high on your list. Great narration, well spoken and acted. Above all this book is very creepy and deviant, guaranteed to make you shiver.