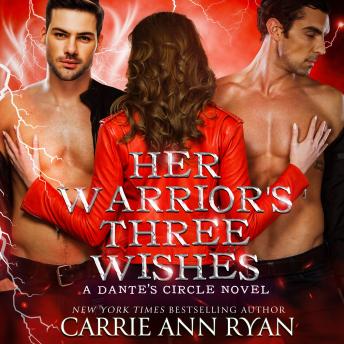 Jamie Bennett knew that warrior angel Ambrose Griffin was hers from the moment she learned that the things that go bump in the night are real. She, along with her friends, was forever changed the night the lightning struck and altered her fate. But what she doesn’t know is that while Ambrose might be hers, she’s missing someone else.

Ambrose always holds himself back because he can’t afford to lose anyone else. He’s lived and lost lifetimes over as he’s fought for his people, and though he knows that Jamie could be his if he takes that risk, there’s something missing. Or, more accurately, someone.

When Jamie is kidnapped and sent to hell, Ambrose will not only risk a war between the realms to find her, he’ll find his heart in the process—in Jamie and Bailin. When Bailin, a demon from hell, meets the two people who could fill his heart and his soul, he’ll need to fight for something he hasn’t felt in over a century—hope.

This title is due for release on September 28, 2015
We'll send you an email as soon as it is available!