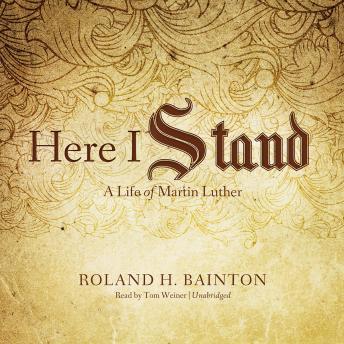 Here I Stand: A Life of Martin Luther

“I cannot and will not recant!…Here I stand.” This authoritative and inspiring story paints a vivid portrait of the crusader who spearheaded the Reformation. Considered one of the most readable biographies of Martin Luther, this volume looks at the German religious reformer and his influence on Western civilization.
Martin Luther entered a monastery as a youth and as a man shattered the structure of the medieval church, speaking out against the corrupt religious practices of the time. His demand that the authority for doctrine and practice be scriptures, rather than popes or councils, echoed around the world and ignited the great Reformation. Accused of heresy and threatened with excommunication and death, Luther maintained his bold stand and refused to recant. In his crusade to eliminate religious abuses, he did more than any other man to establish the Protestant faith.
With sound historical scholarship and penetrating insight, Roland Bainton examines Luther’s widespread influence. He re-creates the spiritual setting of the sixteenth century, showing Luther’s place within it and influence upon it. Here I Stand dramatically brings to life Martin Luther, the great reformer.

Here I Stand: A Life of Martin Luther

This title is due for release on December 13, 2011
We'll send you an email as soon as it is available!