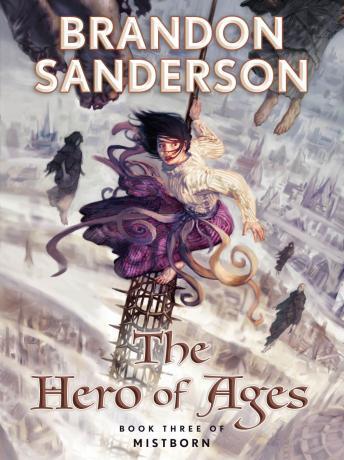 The Hero of Ages: Book Three of Mistborn

#3 of The Mistborn Saga

Who is the Hero of Ages?

To end the Final Empire and restore freedom, Vin killed the Lord Ruler. But as a result, the Deepness--the lethal form of the ubiquitous mists--is back, along with increasingly heavy ashfalls and ever more powerful earthquakes. Humanity appears to be doomed.

Having escaped death at the climax of The Well of Ascension only by becoming a Mistborn himself, Emperor Elend Venture hopes to find clues left behind by the Lord Ruler that will allow him to save the world. Vin is consumed with guilt at having been tricked into releasing the mystic force known as Ruin from the Well. Ruin wants to end the world, and its near omniscience and ability to warp reality make stopping it seem impossible. She can't even discuss it with Elend lest Ruin learn their plans!

blown away, sanderson is the best

I loved this series and the narrator was excellent.

Huge fan of the series, really tied everything together in the end. I enjoy all the lore and subtle stuff that is dropped on you throughput the three books that ends up being very important in the end.

On a scale of 1 to 5, this rates a 5 thousand. The best end to a series I've ever read. Sanderson is a BEAST!

Loved the depth and writing style!

This is the second time listening to the Mistborn series. Amazing. love love love these books. and it's so wonderful that it's a completed story. Michael Kramer is one of the greatest narrator's there is. I could listen to him read anything, a shopping list even!

.The hero of ages Vin frowned, or at least she felt as if she was frowning. Also, Elend frowned. I'm not sure if I give this book 3 or 4 stars, so i'll give it 3.5 stars. The 3rd book of the series brings us the developed characters and the culminating ending. I won't spoil it, I'll just say that it was worth the while, though it wasn't as gripping as the first book - to my opinion (of course).

What kind of lame ending was that?

Excellent trilogy. Michael Kramer is an amazing story teller. He makes the books come to life.

I wonder if there could've been an ending more perfect to this perfect ending to this trilogy's end?

Every time I see the cover of this novel, a myriad of emotions hit me like a wave, throwing me into an unavoidable state of reflection. This volume of the Mistborn trilogy is the grand cherry on top. The transition from The Well Of Ascension to The Hero of Ages was executed perfectly and thoughtfully, helping the reader/listener to catch up on the important details. The narration is as seamless as the writing. If you have made it this far, it would be a grievous mistake to leave the events of this book to the unknown; you have no excuse. I am 29 years of age at the writing of this review, and yet I know that I will look back at this period of my life with the Mistborn series being the focal point.

The pacing of the mistborn books are such that they keep you always at the edge of your seat. this ending to the original trilogy really ties everything together. definitely a series worst picking up.

Sanderson has quickly become one of my favorite authors. Books 1 thru 3 are truly amazing. Hero of Ages was the perfect conclusion. I haven't read books 4 thru 6 yet. I'm not sure how he can improve upon the first trilogy.

The author asked me not to say this. But, darn it, its my review and I mean it! I love this series. It is the greatest series ever written. Period. No really though, I throughly enjoyed this entire series which was non stop awesome all the way through. Fitting conclusion to a series that kept me guessing until the end.

Out of all three books in this trilogy, this one was the most harrowing and difficult to get through, however the reward of the conclusion is somehow even sweeter for it. Sanderson is simply brilliant, tying together even the tiniest threads with creative expertise. He's truly one of the best fantasy writers of our time.

Great story, filled with rich charactors and unique world situations. Micheal Kramer is one of the best readers i know of he is definitely an exceptional reader.

I really like the whole mistborn series. It's one of those books that keeps your attention . I would recommend this book to anyone.

Great characters, great story. The author did a great job contrasting the beauty and determination of the people with the dark and grim desolation of the ash filled world. Wonderful and haunting, I'm sorry it had to end. Love the narrator too, great voices that really matched the characters' personalities!

really great book, everyone should read it. great author and love the narration in this book.

I WANT MORE OF THIS. GIVE IT TO MEEEEEEEEEEE (50 characters)

This title is due for release on October 14, 2008
We'll send you an email as soon as it is available!