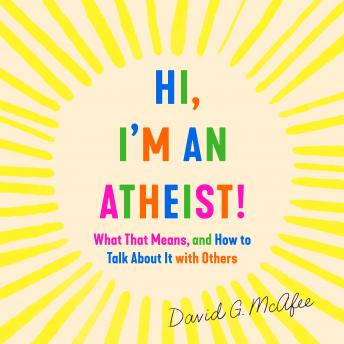 Hi, I'm an Atheist!: What That Means and How to Talk About It with Others

The essential guide to coming out as a non-believer.

David G. McAfee was raised in a conservative American Christian household, so one day, when he stopped going to church—and revealed he didn't believe in gods—his family was shocked. He quickly realized that atheists are misunderstood, frequently thought of as Satan worshippers and anarchists. Thus started McAfee's journey to his true self, and his crusade to tell others—especially those who are devoutly religious—what atheism really is, what he believes in, and why atheists should not be feared.

In this plainspoken and approachable audiobook, McAfee looks at what an atheist believes and the best way to “come out” as an atheist to one’s friends, family, and co-workers. He acknowledges the challenges atheists encounter in talking to others about their beliefs and offers sound advice on how to overcome the difficult moments in any “coming out” conversation. Including a resource guide both for people just coming to atheism and people who have been atheists for years as well as an interview with Rebecca Vitsmun, the woman made famous for coming out as an atheist live on CNN, Hi, I’m an Atheist! is a smart, sensitive, and realistic guide to living one’s life positively and honestly without the need for a belief in God.