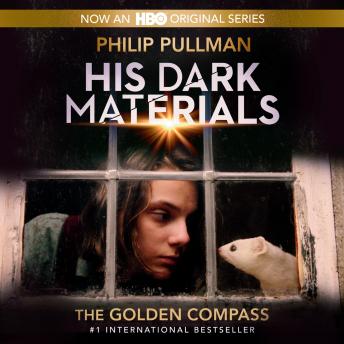 The His Dark Materials: The Golden Compass (Book 1)

#1 of His Dark Materials

The modern fantasy classic that Entertainment Weekly named an “All-Time Greatest Novel” and Newsweek hailed as a “Top 100 Book of All Time.” Philip Pullman takes listeners to a world where humans have animal familiars and where parallel universes are within reach.

Lyra is rushing to the cold, far North, where witch clans and armored bears rule. North, where the Gobblers take the children they steal--including her friend Roger. North, where her fearsome uncle Asriel is trying to build a bridge to a parallel world.

Can one small girl make a difference in such great and terrible endeavors? This is Lyra: a savage, a schemer, a liar, and as fierce and true a champion as Roger or Asriel could want.

But what Lyra doesn't know is that to help one of them will be to betray the other...

A masterwork of storytelling and suspense, Philip Pullman's award-winning The Golden Compass is the first in the His Dark Materials series, which continues with The Subtle Knife and The Amber Spyglass.

'Arguably the best juvenile fantasy novel of the past twenty years.' —The Washington Post

'Pullman is quite possibly a genius.' —Newsweek

I loved the book. The story was excellent. I loved Philip Pullman narrating. Some of the other actors/voices were a bit off-putting, but did not go so far to ruin the book for me. I still would recommend this audio book.

Good start to the trilogy

Great book and the narration is the best I’ve heard so far. The actors add a lot to the experience. Philip Pullman is an excellent author reads very well.

one of my favorite series

I really enjoyed the book and narration.

The sheer awesomeness of this book can be summed up with one word: panzerbeorn.

Didn’t care for the book

Narration was great! Captured the emotion of each moment exceptionally!

I enjoyed the story very much, and the narration was lively and catching. Each character has his own narrator/voice, that fits well to the personality. The story itself feels very much like a modern fairytale with witches, talking bears, and magic objects. I feel that magic was involved, but at the same time, I cannot really recall anybody really using magic in that sense. I had a smile on my face from start to end, and I cannot wait what the second book has to offer...

The diverse narrators for different characters are a nice idea, they make the listening very lifelike, however if you cross-referencing with a printed copy, some of the "unimportant" text like ("Lyra said" ...) is left out, so don't get confused :)

Outstanding narration and a story that sucks you in like only a few modern classics have in the last twenty years. Thoroughly recommend.

I love this book, at the start of the beginning , it throws you in the midst of the action! I am now listening to the second book!

Brilliant, and absolutely the best narration of any book I’ve heard

Best audio book I have ever listened too. The full cast and narrator are compelling and urge you to continue on and on with the material. Amazing!

The whole series is incredible, really. The world is believable from the very start, and Lyra is such a well-developed character. Pullman narrating is a treat, and each voice actor does a great job.

I have read this series many years ago but listening to it brings the characters to life. It is such a wonderful story.

Fantastic storytelling and great narration. I've been recommending audiobooks since listening to this one.

This title is due for release on September 23, 2003
We'll send you an email as soon as it is available!