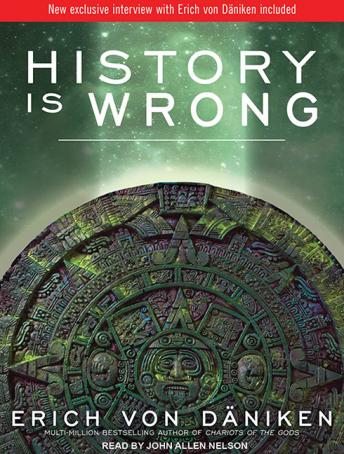 Erich von Daniken again shows his flair for revealing truths that his contemporaries have missed. After closely analyzing hundreds of ancient and apparently unrelated texts, he is now ready to proclaim that human history is nothing like the world religions claim-and he has the proof!

In History Is Wrong, von Daniken takes a closer look at the fascinating Voynich manuscript, which has defied all attempts at decription since its discovery, and makes some intriguing revelations about the equally incredible book of Enoch.

Von Daniken also unearths the astounding story of a lost subterranean labyrinth in Ecuador said to be home to an extensive library of thousands of gold panels. He supplies evidence that the metal library has links not only to the Book of Enoch but also to the Mormons, who have spent decades searching for it, believing it to contain the history of their forefathers.

And what about the mysterious lines in the desert of Nazca that resemble landing strips when viewed from the air? Archeologists claim they are ancient procession routes. 'Think again!' cries von Daniken, as he reveals the data that the archeologists never even thought to check.

History Is Wrong will challenge your intellect-and maybe a few long-held beliefs, too.

Interesting subject. I already knew the author. If you're interested in ancient civilizations and/or the origine of Man kind, you're going to like it.