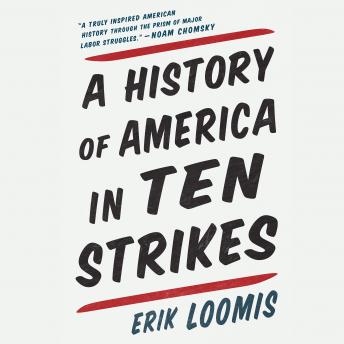 A History of America in Ten Strikes

A Kirkus Reviews Best Book of 2018
Named one of the “5 Books About Famous Strikes That Demonstrated the Historical Importance of Civil Disobedience” by Bustle
“Loomis refuses to romanticize this period or the labor movement it produced. . . . What Loomis’s book perhaps does best is remind us that the promise of the labor movement, despite its many failures and compromises, has always been to make everyday life more democratic.”
—The New Republic
A thrilling and timely account of ten moments in history when labor challenged the very nature of power in America, by the author called “a brilliant historian” by The Progressive magazine Powerful and accessible, A History of America in Ten Strikes challenges all of our contemporary assumptions around labor, unions, and American workers. In this brilliant book, labor historian Erik Loomis recounts ten critical workers’ strikes in American labor history that everyone needs to know about (and then provides an annotated list of the 150 most important moments in American labor history in the appendix). From the Lowell Mill Girls strike in the 1830s to Justice for Janitors in 1990, these labor uprisings do not just reflect the times in which they occurred, but speak directly to the present moment.
For example, we often think that Lincoln ended slavery by proclaiming the slaves emancipated, but Loomis shows that they freed themselves during the Civil War by simply withdrawing their labor. He shows how the hopes and aspirations of a generation were made into demands at a GM plant in Lordstown in 1972. And he takes us to the forests of the Pacific Northwest in the early nineteenth century where the radical organizers known as the Wobblies made their biggest inroads against the power of bosses. But there were also moments when the movement was crushed by corporations and the government; Loomis helps us understand the present perilous condition of American workers and draws lessons from both the victories and defeats of the past.
In crystalline narratives, labor historian Erik Loomis lifts the curtain on workers’ struggles, giving us a fresh perspective on American history from the boots up.
Strikes include:
Lowell Mill Girls Strike (Massachusetts, 1830–40)
Slaves on Strike (The Confederacy, 1861–65)
The Eight-Hour Day Strikes (Chicago, 1886)
The Anthracite Strike (Pennsylvania, 1902)
The Bread and Roses Strike (Massachusetts, 1912)
The Flint Sit-Down Strike (Michigan, 1937)
The Oakland General Strike (California, 1946)
Lordstown (Ohio, 1972)
Air Traffic Controllers (1981)
Justice for Janitors (Los Angeles, 1990)