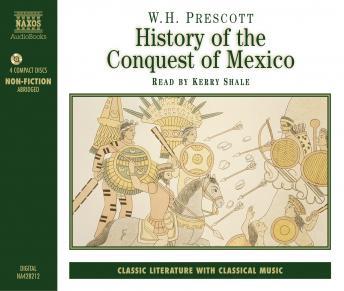 History of the Conquest of Mexico

In 1519, Hernando Cortés arrived in Mexico to investigate stories of a wealthy empire. What he encountered was beyond his wildest dreams - an advanced civilisation with complex artistic, political and religious systems (involving extensive human sacrifice) and replete with gold. This was the Aztec empire, headed by the aloof emperor, Montezuma. With just a handful of men, Cortés achieved the impossible, crushing the Aztecs and their allies, and effectively annexing the whole territory for Spain. One of the most extraordinary stories of conquest in mankind's history, it is told here in the classic account by the American historian W. H. Prescott.

More Like a screenplay than a historical document.The musicwas a disthraction.

This title is due for release on February 24, 2003
We'll send you an email as soon as it is available!