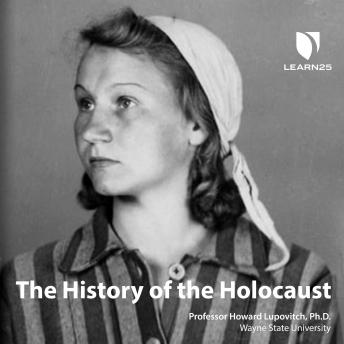 The History of the Holocaust

What gave rise to one of the darkest chapters in human history?

Taught in an accessible and thoughtful manner,, this audio course gives you a deeper understanding of the history of antisemitism as well as a lesson in the strength of the human spirit.

In The History of the Holocaust, you'll reflect on the political, cultural, social, economic, religious, military, and broad historical context in which the extermination of more than five million Jews and other minorities occurred.

Although it is difficult to look upon such bald-faced evil, Prof. Howard Lupovitch (Ph. D. , Columbia University) pilots this series with great courage and insight. In 22 lectures, you'll examine disturbing developments of the 19th century and early 20th centuries, including:
- the pre-modern religious-based hatred of Jews;
- ultra-nationalist politics and post-war xenophobia;
- the Nuremberg Laws and Krystalnacht; and
- The Final Solution.

The mechanization of hatred that made the Holocaust possible raises the bar of unthinkable evil. In our own time, you might wonder how antisemitism compares with other forms of fear and hatred. Ultimately, remembering the Holocaust affords you the opportunity to recognize and confront the pernicious attitudes that denied so many their common humanity. As you examine the aftermath of the Holocaust, including the founding of Israel, you will do so with clear eyes.

I have read many accounts of the Holocaust over my years. This amazing series of lectures puts the events in an understandable, comprehensive perspective that I have not appreciated before. The author is not a professional narrator and his delivery is less than polished, but that does not diminish his message. If you were to choose one book on the this tragic event to get a clear understanding of what happened and why, this is the one.

i found this book very interesting as it consists of a set of class lectures on the history and events leading to the Holocaust and the Zionist movement after WW2, I learned a lot about the definitions of anti-Semitism and Zionism, Jewish "movement" through Europe the past 150 years, and the key events that defined the Holocaust. This book does not address the horrors of the death camps. This book is made for audio since the author presents the information as if in class.

This title is due for release on August 13, 2018
We'll send you an email as soon as it is available!